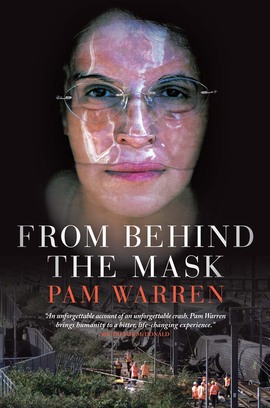 From Behind The Mask

She was not expected to survive. She became the lady in the mask.

In October 1999, Pam Warren’s life was turned on its head when she sustained horrific injuries in the Paddington rail crash. The casualties numbered thirty-one dead and over five hundred injured. Pam underwent scores of operations to rebuild her burnt body, and had to wear a plastic mask over her face for twenty-three hours a day over an eighteen-month period. Unwittingly, she became the public face of the disaster.

Over a decade on from that terrible event, From Behind the Mask charts the true inside story of Pam’s journey from victim to survivor and campaigner. Following the crash she became the UK’s leading spokesperson for improving rail safety, battling with rail management executives and the government – and winning. She was branded a troublemaker, but Pam and fellow members of the Paddington Survivors’ Group helped bring about great improvements on our railways.

For years Pam remained focused on that campaign. Now, for the first time, she can tell us all what really happened. It is an inspirational story of determination and courage.

[A] remorselessly candid self-examination… [with] flashes of humour too… one has to admire this positive spirit given what she has been through.

Pam, labelled at the time as ‘the lady in the mask’, tells her heart-rending story from the immediate aftermath to the ensuing years fraught with depression, pain, nightmares, alcoholism, marriage breakdown and suicide attempts. It’s a candid account of a woman who never gave up despite overwhelming odds, going from victim to survivor and campaigner. An inspirational story of courage and determination.

Pam's courage can't be masked... As Pam Warren continues along her path with great humour and fortitude, she makes us realise there are some things society must never forget.

All of us who travel by train owe Pam and her fellow survivors a debt of gratitude for their tenacity and dedication to improving rail safety.

A story of success, courage, bravery and fortitude … she has triumphed over terrible adversity and come through.

Thank You for this Moment
Extradited
Stephen Ward Was Innocent, OK
Worlds Apart