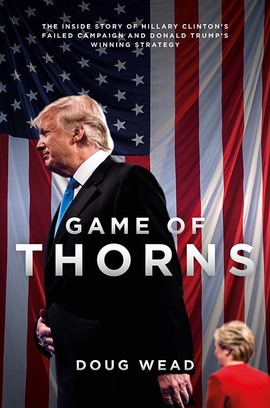 Enter Hillary Clinton: a seasoned politician with a slick PR team and the majority of the world’s media behind her. Now enter Donald Trump: a brash reality TV star with a penchant for aggressive outbursts on Twitter. Even if these aren’t the most obvious ingredients for a presidential race, surely the outcome is a given?

Yet, in one of the most incredible upsets in modern political history, Donald Trump defied the odds and emerged triumphant, leaving his opponent – and the rest of the world – reeling from her shock defeat. But where did it all go so wrong for Clinton?

In Game of Thorns, White House insider and renowned political commentator Doug Wead cuts to the beating heart of the campaign trail. He navigates us through scandal after scandal, even the gravest of which proved powerless to shake Trump’s ardent support; explores the media’s inability to save Clinton’s sinking ship; and explains how even Hillary’s staggering campaign spending was still no match for “the Donald”.

Here, for the first time, is the full story of Donald Trump’s astonishing rise to power.

A great new book just out, “Game of Thorns,” by Doug Wead, Presidential Historian and best selling author. The book covers the campaign of 2016, and what could be more exciting than that?