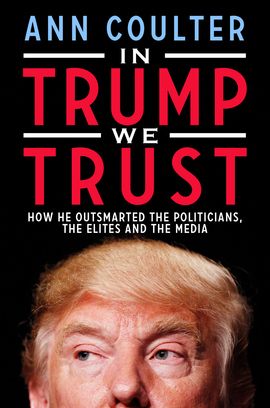 In Trump We Trust How He Outsmarted the Politicians, the Elites and the Media

If there’s one thing most people in America – and, indeed, the world – can agree on, it’s that Donald Trump isn’t a politician. The President-elect, however, he most certainly is. And whether you’re happy about that fact or not, there’s no denying that the three biggest news stories of the 2016 US election have been Trump, Trump and Trump.

The media have twisted themselves in knots trying to grasp how he took control of the Republican Party, how he won over millions of voters, and – most of all – what he’ll be like as President.

But bestselling author and political commentator Ann Coulter isn’t puzzled. She knows why Trump was the only one of seventeen Republican contenders who was able to capture the spirit of our time. She gets the power of addressing the silent majority and saying things the PC Thought Police considers unspeakable.

And with her unique insight, candour and sense of humour, she makes the definitive case for why we should all join his revolution – and why a bull in the china shop is exactly what America needs to make it great again.

If you’re already a Trump fan, Ann Coulter will help you defend and promote your position. If you’re not, she might just change your mind.