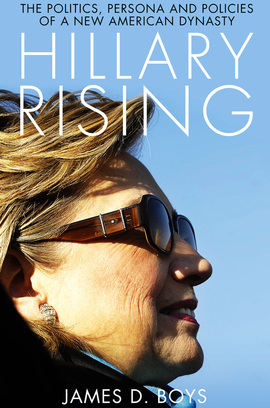 Hillary Rising The Politics, Persona and Policies of a New American Dynasty

On 12 April 2015, Hillary Clinton formally announced her intention to run for President in 2016, casting herself as the ‘champion of everyday Americans’. With near-universal name recognition and the promise to make history as the first female occupant of the Oval Office, all seems set for Hillary to secure the one role that has eluded her to date, but what drives this most intriguing and polarising of political figures?

Will she be able to shake off her past mistakes and finally secure the Democratic Party’s nomination? What are her chances of winning the White House? And, perhaps more importantly, what kind of President would she make?

Drawing on original interviews with close associates of both Bill and Hillary, as well as a wealth of recently declassified materials from the Clinton archive, James D. Boys offers a clearsighted, non-partisan analysis of Hillary’s rise to the pinnacle of American power, revealing the political ideology and core principles that have remained a constant throughout.

“A comprehensive analysis of Clinton’s career and her chances of achieving that lifetime ambition [...] Only time will tell whether this hard-won knowledge will take her all the way to the White House. While you wait, Hillary Rising is a great reminder of the story to date.”

“The Hillary Clinton of James D Boys’s biography is a more nuanced and calculating character, closer – I’d have thought – to the truth.”

“I thoroughly enjoyed Hillary Rising. So insightful and wonderfully ties up all the elements of her life and career into an indication of the type of Clinton Administration she hopes to head up.”

Ready For Hillary?
Gun Barons
The Men from Miami
China vs America