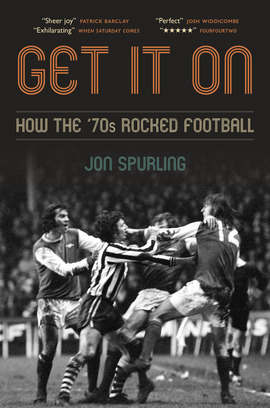 Get It On How the ’70s Rocked Football

Four years after the crowning glory of 1966, and a decade after the abolition of the maximum wage, a brash new era dawned in English football. As the 1970s took hold, a new generation of larger-than-life players and managers emerged, appearing on television sets in vivid technicolour for the first time.

Set against a backdrop of strikes, political unrest, freezing winters and glam rock, Get It On tells the inside story of how commercialism, innovation, racism and hooliganism rocked the national game in the 1970s.

Packed with interviews with the legends of the day, this footballing fiesta charts the emergence of Brian Clough, Bob Paisley and Kevin Keegan and the fall of George Best, Alf Ramsey and Don Revie, presenting a vibrant portrait of the most groundbreaking decade in English football history.

“Commendably avoids the usual romantic cliches ... Spurling tells it like it was.”

“If 1970s football is due a reappraisal, Get It On is an exhilarating place to start.”

“Get It On’s great strength is the catalogue of interviews, conducted by Spurling over the course of twenty-five years with those who experienced this acceleration into the modern era first hand.”

“It’s all here – the swagger, success and excess of ’70s football plus how that tumultuous ten years truly gave birth to the modern era. This is far more than a brilliant evocation of a game changing decade for football – it’s also a superb summary of the ch-ch-ch-changes Britain saw in the ’70s – from glam rock to punk, from Harold Wilson to Margaret Thatcher.”

“Jon Spurling is a superb navigator through those memories, recalling the times without hint of rose-coloured spectacles … Here are original, never-heard-before accounts. It is like the most poignant literary seance, our lost heroes apparently addressing us from beyond the grave.”

“Radical change hit football in the early ’70s, all of which is woven into a brightly coloured tapestry here. It’s the little details that grab you in this hearty slice of ’70s football life. *****”

“The unhinged nature of soccer in this transformative decade [has] been moulded by the perfect writer into an absorbing, irresistible book.”

“Spurling draws on countless interviews with some of the biggest names in the game … The end result is an engagingly written appraisal of the decade that both rekindles memories and explains how, in the evolution of the game in England, the 1970s was a truly groundbreaking time.”

“So evocative you can almost smell the dubbin on Alan Hinton’s white boots.”

“You always know you’re going to get a fascinating read from Spurling, but this is his most vivid book yet – sheer joy! For us old geezers it’s like being miraculously transported back to the 1970s. And for younger readers I can promise you quite an education.”

“A fascinating, funny and poignant stroll down memory lane of an era that shaped the modern game. The ’70s was the decade when English football went pop. It exploded. Football went from black and white to colour. Players became personalities. Football went from short back and sides to sideburns and mullets. It began with England’s squad singing ‘Back Home’, which sold 100,000 copies a day, as they headed to the World Cup and sadly continued with England staying back home when they didn’t qualify for the ’74 and ’78 World Cups. Even then, the show went on, changing football for ever.”

“Jon Spurling’s brilliant, non-judgemental, superbly researched and anecdote-laden book is a wonderful telling of when football and all those involved in it were dragged out of the footballing dark ages of the 1960s and into the money-fuelled and fame-filled combination of excess and success that it has become today.”

“Get It On is the superbly told story of the decade when football became flash. It has a cast to die for – from Big Mal to Old Big ’Ead, through Bestie, Bowles and the Doc. You can smell the Brut and taste the Watneys Party Seven. A brilliant history of footballers you thought you knew but didn’t.”

Tim Rich, author of The Quality of Madness: A Life of Marcelo Bielsa

“A wonderfully evocative portrait of an incredible decade for English football. It pulls together cultural history seamlessly and brings to life the major characters from the era.”

“The big teams, events and personalities, and intriguing new angles on familiar tales… Many of the key figures are no longer with us, but the indefatigable Spurling tracked down many of them and recorded their memories before they left.”

“Cracking tales from the terraces amid betrayal in the boardrooms.”

Tim Marshall, author of “Dirty Northern B*st*rds!” and Other Tales from the Terraces: The Story of Britain’s Football Chants

“Bringing football history to vibrant life is Jon Spurling’s gift – and it is also a gift to the reader. He transports us back to a time when the mavericks and marvels challenged convention during the 1970s. It was a fascinating period of old meeting new in the game’s evolution and Spurling’s storytelling, insights and eye for character and social context shine through.”