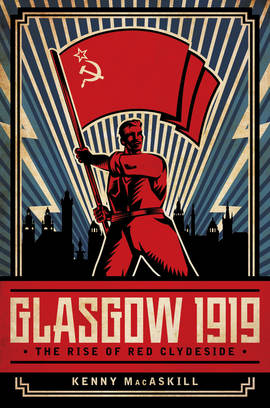 Glasgow 1919 The Rise of Red Clydeside

The arrival of January 1919 sees Europe in turmoil, with revolution breaking out across the Continent. Glasgow’s industrial community has been steeled by radicalism throughout the Great War, and as the spectre of mass unemployment and poverty threatens, a cadre of shop stewards, supported by political activists, is ready to strike for a forty-hour week. They face a state nervous of their strength and anxious about the wider consequences of their action, with the War Cabinet monitoring the situation closely.

On 31 January, now known as Bloody Friday, tensions came to a head when 60,000 demonstrators clashed with police in George Square. The ‘Scottish Bolshevik Revolution’ (so termed by the Secretary of State for Scotland) erupted, with tanks and 10,000 soldiers immediately despatched to the city to enforce order. The strike may have failed, but 1922 saw the arrival of Red Clydeside, as the Independent Labour Party swept the board in the general election.

Now, 100 years on, Kenny MacAskill separates fact from fiction in this adept social history to explore how the events of that fateful day transpired and why their legacy still endures. Drawing on original material from speeches and newspaper reports of the time, MacAskill also paints a vivid picture of the solidarity amongst the working class in a rousing testimony to Glasgow’s long radical history.

“MacAskill is at his best as a writer when getting to grips with the detail of events; set-pieces such as the fracas in George Square are portrayed in great depth and with an eye for the dramatic moment.”

“Capital versus labour; policemen’s truncheons smashing skulls under flat caps, with army tanks brought into George Square as the establishment tries to crush dissent. Revolutionaries versus reformers fight it out, dreaming of the best way to achieve dignity amongst the penury. What might have been if there was more unity throughout the country? This is a terrific popular history by Kenny MacAskill, setting the imagination alive as the decades flash before us.”

Paul Laverty, screenwriter of The Wind that Shakes the Barley and I, Daniel Blake

“A new and thoughtful insight into a vital part of our history that has had such an impact on our political, social and economic landscape, and which many of us still share and believe in today.”​

“With impeccable research and a brilliant way with words, Kenny MacAskill has written a hugely rich and unapologetically frank book on the history of Bloody Friday in Glasgow. Comprehensive in scope, once you start reading it’s an eye-opener you can’t put down.”

“As the Great War ended, a century ago, revolutions broke out all over Europe. Some were ‘social’ and Bolshevik, some were national. The socialist uprisings failed, but left fateful consequences: middle-class terror of ‘Reds’, and – ironically – the strengthening of capitalism through welfare states and the acceptance of collective bargaining. In this thrilling book, Kenny MacAskill pilots us down Red Clydeside to the brink of its Niagara – a real revolution – and shows why it didn’t go over the edge. This is the story of Glasgow as a great city awakening to its own strength – the incredible power of mobilising hundreds of thousands of working men and women to defy authority and battle for justice. But MacAskill also reveals how Red Clydeside’s leaders failed to crack the government’s confidence in its ability to rule. Revolution was postponed: most of the strike leaders became Labour MPs driving social reform in decades to come.”

“The book is well written and clearly done with an admiration for the people and events he writes about.”