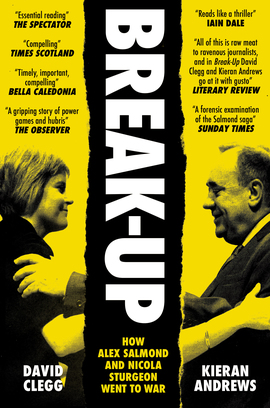 Break-Up How Alex Salmond and Nicola Sturgeon Went to War

By David Clegg and Kieran Andrews

Alex Salmond and Nicola Sturgeon’s political partnership changed the face of Scotland, bringing the country to within 200,000 votes of independence and holding sway at Holyrood for more than a decade. So how and why has their thirty-year alliance irretrievably broken down?

Break-Up tells the inside story of how the once unbreakable unity of the Scottish National Party was ripped apart amid shocking claims of sexual assault. With unrivalled access to both camps and the women who made the allegations, and with rigorously fair-minded reporting, journalists David Clegg and Kieran Andrews go behind the headlines to uncover the truth about this extraordinary episode, in a piece of political history that reads like a thriller.

Now fully updated, this is a jaw-dropping tale of inappropriate behaviour in the highest reaches of power, of lies, distrust and alleged conspiracy, with profound implications not only for Salmond and Sturgeon themselves but for Scotland’s governing party and the wider independence campaign.

“A gripping story of power games and hubris”

“Timely, important, compelling … This is an intense, often claustrophobic tale of insider politics. Ultimately, [Break-Up] asks brave questions which all the main protagonists would prefer not to discuss that go beyond the Salmond–Sturgeon power play.”

“A forensic examination of the Salmond saga”

“All of this is raw meat to ravenous journalists, and in Break-Up David Clegg and Kieran Andrews go at it with gusto.”

“Essential reading ... Anyone wishing a better understanding of why Scotland is governed the way it is will need to read their book.”

“A valuable study of the failings of Scotland's political establishment”