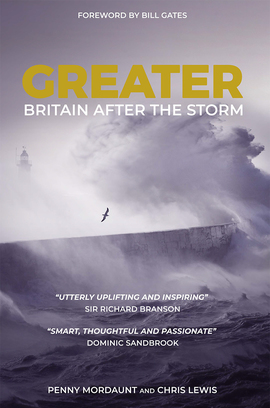 Greater Britain After the Storm

By Penny Mordaunt and Chris Lewis

We’re used to hearing that we live in an age of unprecedented division, that the great storms that have engulfed British politics over the past ten years have driven us further apart than ever, with no hope of finding common ground.

Penny Mordaunt and Chris Lewis disagree. In this lively and insightful book, they argue that although differences of opinion are a natural part of healthy political debate, some of our current division is caused by a need for political reform. A wave of scandals has corroded public confidence in leadership in all walks of life, fuelled by a hyper-individualistic social media landscape – but by rebuilding public trust we can restore national pride and positive, competent politics.

Greater lays out a plan for post-Brexit Britain. Delving into our history, our institutions and our culture, it explains how we arrived at this point and how the British character points the way towards practical national missions.

It explores Britain’s role in the world and how to balance global and local priorities; makes the case for the United Kingdom based on the mutuality that binds us; and calls for modernising reform in politics, government and markets. It describes the role of social media in culture wars and calls for a relentless focus on aspiration and a social enterprise revolution. Above all, it reminds us of the many reasons we have to be optimistic.

"Reminds me of so many things I love about the UK."

"This book lays out a clear plan for Britain. It says we need to modernise, socially, culturally and economically. I cannot recommend it highly enough."

“Britain will need a clear vision and renewed hope for the decade ahead. This book offers them – arguing it has the reasons for confidence and the resources to meet the challenges. After five years of division and turbulence, here is a path to a better future.”

“At last a book about why we can and should be proud to be British and how we can draw on our character and values as the foundation on which to build our future. The book is timely, provocative and funny. Even the most sceptical and curmudgeonly will surely see the value of Britain regaining its confidence and playing a leading part in building a sustainable global future.”

“Truly impressive – expect to see this book in any international commentator’s shelfie! As a new era of US leadership dawns, this is a timely blueprint for what Global Britain should be all about. Eminently qualified to report from the frontline of politics and business, Penny Mordaunt and Chris Lewis raise the bar on Britain’s aspirations.”

“Penny Mordaunt and Chris Lewis have written an essential book about some of the most important issues we face as a country today. It’s a hugely entertaining read that tackles some vital questions, including how we can reunite our polarised country and how our local communities can become even stronger. After a turbulent few years, this is exactly the optimistic, patriotic and ambitious book that our country needs.”

“Self-belief and self-awareness are needed to achieve any goal. This book provides a plan and, perhaps more importantly, restores pride in our country and each other. When we are united and focused, there is nothing we cannot do.”

“I’m deeply proud to be British, not least because of the extraordinarily brave, funny, brilliant, kind and talented people who call these small islands home. In particular, I’m proud of Britain’s history of engaging in the challenges people face, not just at home but around the world. It has inspired and supported the work of my AIDS Foundation, which aims to help end this devastating pandemic around the world. A book examining what it means to be British and Britain’s potential to be a force for good in the world is timely. Penny and Chris should be congratulated on seizing the opportunity to look forward in this interesting and enjoyable book.”