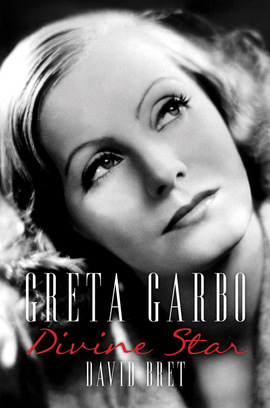 Though there have been numerous biographies of Greta Garbo; this is the first to fully investigate the two so-called missing periods in the life of this most mysterious and enigmatic of all the Hollywood stars. The first, during the late 1920s, when Garbo disappeared completely for several months, forcing the studio to employ a lookalike, was almost certainly to conceal a pregnancy. The second occurred during World War Two, when Garbo was employed by British Intelligence to track down Nazi sympathisers.
In Greta Garbo: Divine Star David Bret has acquired a large amount of previously unsourced material, along with anecdotes from friends and colleagues of the star which have never before been published. For the first time, he paints a complete portrait of her childhood and youth in Sweden. Bret has also sourced copies of all Garbo’s films – with the exception The Divine Woman, of which no print survives, including the silents – before scenes were trimmed or cut.

there are lots of fascinating details