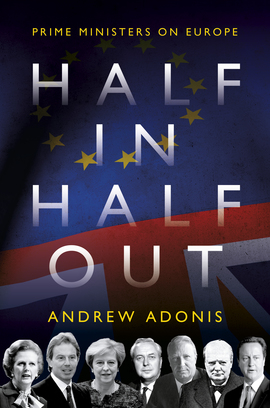 Half In, Half Out Prime Ministers on Europe

The decades since the end of the Second World War have seen massive change sweep across Britain’s social, cultural and political landscape. Yet throughout this period, one thing has remained constant and unchanging: the thorny question of our relationship with Europe.

Ever since Churchill, Europe, and Britain’s place in or out of it, has been a hugely divisive issue in British politics, creating warring camps in both the Labour and Conservative parties. Famous Europhiles to put their heads above the parapets over the years have included Conservatives Ted Heath and Harold Macmillan, as well as Tony Blair for Labour, while leading Europhobes count among their number the former Conservative Prime Ministers Anthony Eden and Margaret Thatcher.

Born out of a series of Oxford University lectures devised by the former Cabinet minister and No. 10 policy director Andrew Adonis, Half In, Half Out features chapters by prominent political figures, including Sir Nicholas Soames, David Owen and Chris Patten, that provide revealing portraits of Britain’s former leaders and their often vastly differing attitudes towards our neighbours on the other side of the Channel.

This book will become a source for future politics and history undergraduates writing essays on the causes of Brexit.

Europe: In Or Out?
Collapse
Clean Brexit
Well, You Did Ask...