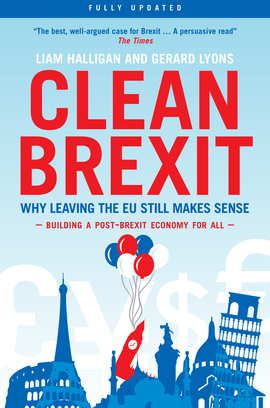 By Liam Halligan and Gerard Lyons

On 23 June 2016, in the biggest ever vote in British history, 17.4 million people chose to leave the EU. What will life be like in the wake of this momentous decision? Will Brexit precipitate the doom and gloom that many predict?

Drawing on years of experience at the cutting edge of economic, business and policy issues, plus extensive discussions with leading politicians and diplomats around the world, Clean Brexit answers these questions – and more.

Economists Liam Halligan and Gerard Lyons believe great days lie ahead. Brexit is an opportunity to strike deals with the world’s fastest-growing economies, boosting British trade and job prospects. Freed from the EU’s regulatory stranglehold, the UK can thrive, spreading wealth throughout the country. Directly elected MPs will once again have the final say over our laws, borders and taxes.

Timely and accessible, Clean Brexit is the ultimate guide to making a success of Britain’s divorce from the EU.

"The book is well written and well structured […] if the Remain camp had set out their arguments as cogently and persuasively as Halligan and Lyons have, they might have won."

“Excellent. This analysis from Halligan and Lyons is thorough and lucid, the conclusion compelling.”

“Recommended reading. Halligan and Lyons are two economists I respect and whose writings I follow closely.”

“Project Hope is the way to take the country forward. Liam Halligan and Gerard Lyons have provided an excellent book to help us face the challenges and considerable opportunities ahead.”

Dame Helena Morrissey, financier and founder of the 30% Club

“It took the UK twelve years to join a simple trading arrangement, the European Economic Community; Halligan and Lyons present the best guide to getting out in much less time."

"In this fraught environment, there is ample need for a book that sets out constructively and dispassionately the economic case for why Britain’s EU departure may turn out to be a success. Clean Brexit – Why leaving the EU still makes sense, goes a long way to meeting this requirement."

"The best, well-argued case for Brexit .... A persuasive read."

“Practical and lucid …shows how Britain could succeed post-Brexit if it embraces economic reform.”

What Has The EU Ever Done for Us?
How To Lose A Referendum
Guilty Men
The Borisaurus