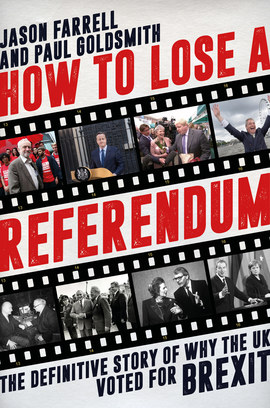 By Jason Farrell and Paul Goldsmith

Did David Cameron have to call a referendum? Did history put a gun to his head? And was Britain’s departure from the EU destined from the moment he called it? Was it a lost cause, or did the Prime Minister lose it?

Sky News senior political correspondent Jason Farrell teams up with political blogger and economics and politics teacher Paul Goldsmith to provide the definitive story of one of the biggest shocks in British political history.

Probing into the social fabric of the UK, the psyche of the electorate, and seventy years of European history, Farrell and Goldsmith identify eighteen key reasons why the UK made its choice, from Britain’s absence at the birth of the European project to the inflammatory rhetoric of one Nigel Farage, and everything in between.

How to Lose a Referendum is the product of extensive and refreshingly frank interviews with the key players from both campaigns coupled with a wide-ranging exploration of the historical context around Britain’s departure. Why was a project designed for common peace and prosperity ultimately so hard to defend?

Whether you’re a Leaver or a Remainer, a newcomer to the debate or a battle-hardened politico, this nuanced and thoughtful analysis will change the way you look at Britain’s vote for Brexit.

"Farrell and Goldsmith tell the story with exceptional clarity, insight and thoroughness, and, even if you know this topic well, you’ll learn something new. It is the best single-volume account of all the factors that contributed to Brexit."

“If you want an easy explanation for why we voted for Brexit, then look elsewhere.  Yes, this book is pacy and punchy.  But it’s also a subtle and sophisticated take on how history, chance and a cast of key players all combined to create the perfect storm that hit the UK on 23 June 2016.”

“This compelling and thoughtful book tells us how and, more importantly, why Brexit happened. The drama is all there and so is the historic context of Britain’s troubles with Europe. A must-read.”

“I can’t read enough about this topic, the absolute turning point of modern politics. This book is a very valuable volume. Well researched, well written, challenging and important.”

“To understand the volatility of Britain’s present political predicament, it is vital to understand the revolution that took us here. Jason Farrell and Paul Goldsmith’s How to Lose a Referendum explains, with a seventy-year historical sweep and detailed cultural context, why Britain will never be the same again, in a first-class and highly readable Brexit book like no other.”