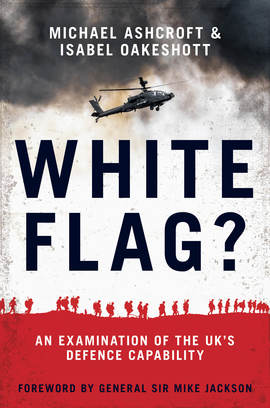 White Flag? An Examination of the UK's Defence Capability

By Michael Ashcroft and Isabel Oakeshott

After the pain of Iraq and Afghanistan, it is hard to imagine the UK being drawn into another war. Defence chiefs warn that there is a real prospect of future conflict, but they have struggled to persuade most politicians to take them seriously. Our leaders have concluded there are no votes in defence, and have progressively run down the armed forces. Today, the army is at its smallest since the Napoleonic Wars; the RAF is less than half its size twenty-five years ago, and the Royal Navy will struggle to muster the ships and weapons required to protect our new aircraft carriers.

Is there really a risk of war? Is our military less capable and, if so, what could that mean for our future? White Flag? explains what has happened to our armed forces in recent years and asks whether their decline endangers our safety and prosperity.

"White Flag? is an absolutely gripping, sit-up-and-listen, no-holds-barred investigation of British military clout. This is the sort of stuff our political leaders, of whichever stripe, should be telling us, but don’t. That it often makes uncomfortable reading is a tribute to the clarity and honesty of its analysis, a bracing change from the routine assurances our political masters dole out about our armed forces, despite rounds of savage defence cuts since the 1980s."

“If ever there were a time when the UK needed a clear national strategy with strong armed forces at its heart, it is today. Yet, as this excellent book makes disturbingly clear, the opposite is true: we have no strategy and weakening armed forces. Thought-provoking and highly readable, this book shows how we have reached this nadir and what must now be done to rectify it. At stake is the protection of our way of life in a very troubled world. I commend White Flag? equally to defence professionals and interested laymen.”

“This book will change the way you think about our country’s defence.”

“This is an essential book at a crucial time. It needs to be read by anyone who cares about the UK’s security and prosperity – and about our children’s prospects in the twenty-first century.  The book establishes the battered state of the UK’s armed forces and why they cannot now defend our homeland or secure our vital interests. It shows we must now choose: either innovate and pay to transform the armed forces to do the job we ask of them, or accept that the UK will  rely on luck and the benevolence of our opponents to exist in a much more challenging world.”

“White Flag? offers a refreshing independent analysis of the state of the armed forces, free of the inter-service rivalries that can undermine analysis on this subject. The authors have a unique insight into the political wrangling over defence and how this affects the military.

While giving praise where it is due, the authors reveal the dysfunction at the heart of political decision-making on military matters and explore the huge challenges faced by the Ministry of Defence. They show how politicians of all parties, believing there are no votes in defence, have consistently underfunded the armed forces in the hope that they will only ever engage in ‘wars of choice’. In a straightforward and highly readable style, this book explains why defence cannot be taken for granted.”

“Britain needs to read this book before it’s too late.”

“White Flag? shines a light on a very worrying situation. This book must be read by anyone interested in defence issues and the security of our country, professional or otherwise.”

“A highly readable and constantly interesting account of how our armed forces function today and what they could be missing. This book is an urgent reminder to all of us to think hard about new threats that are developing rapidly. It is essential reading for anyone concerned about the future defence of Britain, and should be recommended for those under the illusion that they need not be concerned.”

"Politicians may reflect that their role is to shape opinion, rather than be led by it. If there are those in public life who believe that Britain's defence requires more funding, they must step up and make the case; this book gives them plenty of ammunition."

“A no-holds-barred investigation of our perilously shrinking military.”