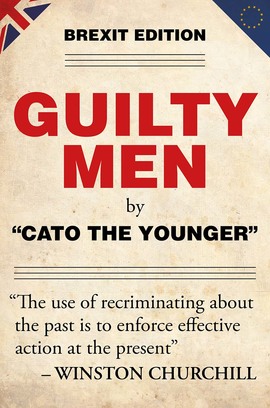 By Cato the Younger

Britain’s 2016 vote to leave the EU was the most momentous democratic decision ever made in British history. No development since the Second World War is likely to have more far-reaching consequences for the British economy, society, politics and culture. Some predict it will lead eventually to the break-up of the UK, others to the end of the EU, others to an enhanced likelihood of war in Europe and beyond.

The vote to leave took just a single day, but the decision to call the referendum followed several months of agonising in No. 10, while the ground for Britain’s departure was sown over many, many years.

When Britain entered the EU in 1973, it was known as ‘the sick man of Europe’. When it voted to leave in 2016, it had the fastest-growing economy in the G7,and it was both the world’s top soft power and one of its most creative and tolerant nations.

Why have we risked all this? Ask the guilty men, who, for reasons of personal gain, misplaced ideology or sheer folly, have jeopardised all our futures.

'It’s a fabulous – what does one call it? – just what the world needs today, an intelligent, energetic tirade/diatribe/broadside/polemic/philippic – sometimes icily furious,  sometimes fierily so. But always filled with highly credible research and political understanding. If we don’t self-correct at the last minute, this book will stand to future generations like an urgent warning to the Titanic that somehow got drowned out by the sound of the band.'

‘Compelling, incisive and devastating. Cato the Younger identifies the Guilty Men of Brexit in the way his great-grandfather exposed those to blame for appeasement in the 1930s. To paraphrase Churchill, never in recent times has so much damage been inflicted by so few on so many. It will take leadership of his calibre to reverse the folly. None is in sight.’

‘An enjoyable and wonderful polemic [..] provocative and unapologetic in its tone.’

What Has The EU Ever Done for Us?
Summer Madness
The Borisaurus
White Flag?