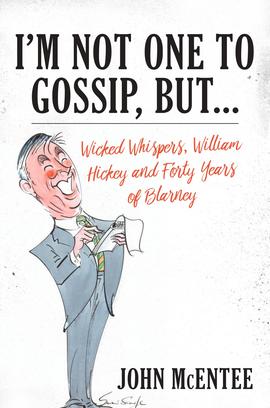 I’m Not One To Gossip, But... Wicked Whispers, William Hickey and Forty Years of Blarney

From an embarrassing encounter with Jim Callaghan (and his impressive member) in the gentlemen’s toilet of the Savoy Hotel to the time he was almost throttled by Angela’s Ashes author Frank McCourt, John McEntee’s career has been nothing if not colourful.

After reporting on the IRA terror campaign while a correspondent for the Irish Press, John soon found his home on London’s gossip circuit. With one ear always on the alert for scandalous remarks and titillating tit-bits of conversation, John was launched into a world of endless cocktail parties, book launches and openings, first as the author of the Mail ’s spiky Wicked Whispers gossip column and then as what turned out to be the last ever William Hickey columnist on the Daily Express.

Glamour and celebrity encounters aside, whoever said the job of a gossip columnist was easy has obviously never had to pick up the bill at El Vino after a drunken Kingsley Amis has spent the afternoon working his way through the whisky menu.

Gloriously entertaining and wonderfully indiscreet, John McEntee’s enchanting autobiography is a veritable goldmine of anecdotal gems from one of the true denizens of Fleet Street.

“John is one of the funniest men in the world and he has written a gloriously gossipy, very funny and lovely memoir.”

“One of the highlights of my morning for a few years was pulling up my bedroom window in Kensington and yelling, ‘Whose life will you be ruining today?’ to a distinguished figure passing by. It was John McEntee. He would be making his way to work to practise his trade as a mischievous gossip columnist, a job for which wit, charm and insatiable nosiness are vital. McEntee has all three in lorryloads. He is one of the Titans of his trade.”

“McEntee is no stranger to telling a story himself. In fact, he’s a master. He has somehow, managed to put all his various hysterical, thoughtful, political anecdotes into one tome I’m Not One To Gossip, But...”