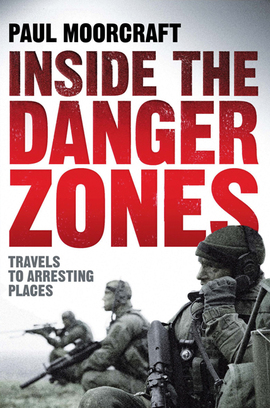 Inside the Danger Zones Travels to Arresting Places

Sometimes hilarious, sometimes tragic, Inside the Danger Zones is the story of Paul Moorcraft’s work during the major wars of the last three decades. As a freelance war correspondent and military analyst for many of the top TV networks, Moorcraft has parachuted into countless war zones and worked at the heart of the British British security establishment. He has the habit of being in the wrong place at the worst of times, from the siege of Sarajevo in the 1990s to the siege of the West Bank town of Jenin in 2002. This book takes him to a series of conflicts from Afghanistan to Zimbabwe, covering coups and counter-coups across the globe. Along the way he encounters some of the most dangerous people in the world; in Afghanistan when the West was training bin Laden’s Mujahedin fighters, interviewing Mugabe during the Rhodesian Bush War of the late 1970s and travelling to meet Saddam on the eve of the 2003 allied invasion of Iraq.

I am amazed he's still alive.