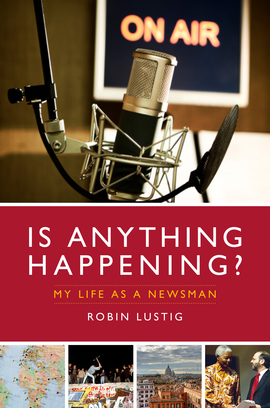 Is Anything Happening? My Life as a Newsman

In the days before mobile phones, the internet and 24-hour news channels, the easiest way for a British foreign correspondent to find out what was going on in the world was to phone the local office of Reuters news agency and ask: ‘Is anything happening?’

That’s how the award-winning BBC reporter and presenter Robin Lustig started out in journalism, working for Reuters as an agency man. During a distinguished career spanning more than forty years, he watched the world of news change beyond recognition, as he reported on terror attacks, wars and political coups.

In this witty and illuminating memoir, Lustig looks back on his life as a newsman, from coming under fire in Pakistan to reporting on the fall of the Berlin Wall; from meeting Nelson Mandela to covering Princess Diana’s sudden death.

Back in the studio, Lustig lets us in through the BBC’s back door for a candid, behind-the-scenes look at some of his triumphs and disasters working for the nation’s favourite broadcaster. He writes of his childhood as the son of refugees from Nazi Germany and, drawing on thirty years of reporting about the Middle East, he comes to a startling conclusion about the establishment of the state of Israel.

Astute, incisive and frequently hilarious, Is Anything Happening? is both an irresistible personal memoir and an insightful reflection on world events over the past forty-five years.

“This memoir is everything you would expect from its author: intelligent, shrewd, witty, civilised and great company. He lifts the lid on life within BBC newsrooms and captures the fun of touring the world’s trouble spots as an eyewitness to great events and interviewing the lead characters. Along the way, he reminds us why serious journalism still matters.”

“Robin Lustig’s memoir is an engaging mix of anecdote, reportage, reflection and the odd bit of gossip – as good a late-night companion as his voice on Radio 4’s The World Tonight.”

“This is a wonderfully evocative and sympathetic memoir. Robin Lustig, a prince of BBC journalism as reporter and presenter for more than twenty years, tells his stories with a range of brilliant and often witty anecdotes, sharp observation and an unstinting generosity of spirit. He has been everywhere and seen much – but there is no cynicism. The humanity of the man shines through.”

“A good grounding for those interested in the craft of broadcasting […] without overdoing on heroics or self-importance.”