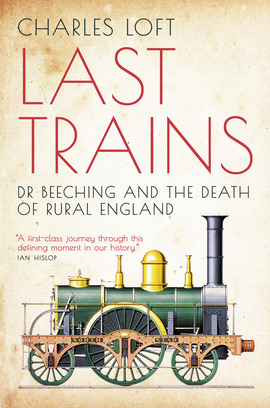 Last Trains Dr Beeching and the Death of Rural England

New edition of the acclaimed history, published to mark the 60th anniversary of the Beeching Report that tore up Britain’s railways and changed the country for ever.

During the course of the 1950s, England lost confidence in its rulers and convinced itself to modernise. The bankrupt steam-powered railway, run by a retired general, symbolised everything that was wrong with the country; the future lay in motorways and high-speed electric – or even atomic – express trains. But plans for a gleaming new railway system ended in failure and on the roads traffic ground to a halt.

Along came Dr Beeching, forensically analysing the problems and expertly delivering a diagnosis – a third of the nation’s railways must go. This was the point at which the reality of modernisation dawned and rural England fell victim to the road and car – at least, that is how Dr Beeching is remembered today.

Last Trains examines why and how the railway system contracted, exposing the political failures that bankrupted the railways and examining officials’ attempts to understand a transport revolution beyond their control. It is a story of the increasing alienation of bureaucrats from the public they thought they were serving but also of a nation that thinks it lives in the countryside trying to come to terms with modernity.

“This book tells the full story behind the Beeching cuts.”

“A first-class journey through this defining moment in history.”

“The debate about Dr Richard Beeching will rage until the Second Coming – and probably beyond. But, in Charles Loft's careful examination of the making of the Beeching Report, we have as fine a study as we are going to possess in the meantime.”

“Loft's great strength is his judiciousness. He understands the political processes and assesses them fair-mindedly. And his verdict will, I suspect, hold up better than any of Beeching's judgements.”

“Prepare to be impressed, shocked and saddened if you read this fine publication … This is undoubtedly one of the best books of the year – a riveting read.”

“Lucid, to the point, thought-provoking at every turn, Last Trains is a volume that everyone should read before making judgements, often with the benefit of much hindsight, about the rail closures of the Sixties.”

Energy Transformation
Stanley, I Resume
The Green Book
The Frog With Self-Cleaning Feet