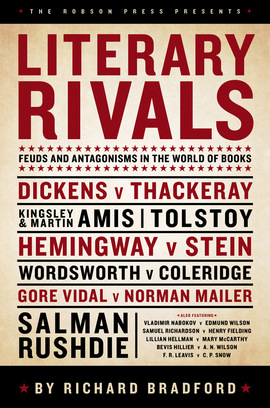 Literary Rivals Feuds and antagonisms in the world of books

Novelists, poets and playwrights live double lives, sharing the real world with everyone else while spending a good deal of time in a universe of their own making. When they fall out with each other, they are able to kindle feuds and antagonisms as passionate and public as workers in any trade. Richard Bradford’s highly entertaining book looks at some of the closest and most complex relationships in literary history, as well as examining their dramatic effects on literature itself:

- Who was the object of Coleridge’s infatuation that drove a wedge between himself and Wordsworth?
- Where did Thackeray utter the single sentence that ended his tentative friendship with Dickens?
- Why did differing opinions lead to the cessation of letters between former confidants Amis and Larkin?
- How did Hemingway use and abuse Stein’s artistic circle in Paris?
- What American literary ambition spawned brutal competition between Capote and Vidal?

From Tolstoy’s deferred duelling and Dostoevsky’s defamatory fiction, to J. C. Squire’s qualms with modernism and Salman Rushdie’s run-in with Islam, Literary Rivals is an enjoyable romp through the world of the fiercest writers’ rivalries and the most bizarre literary stand-offs.

The sections on complex one-upmanship, evinced in letters and the works themselves, are full of close reading and insight. If you’re after some knockout put-downs, it doesn’t get much better than this

Just how many of the great literary works were replies to, or parodies of, lesser works by rivals? It’s an intriguing question... which Richard Bradford commendably doesn’t shirk from confronting; we don’t necessarily like to see our favourites behaving badly… What Bradford also exposes, apart from who the clear winners of these arguments are, is the importance of literary success, and legacy, to many writers, especially those whose egos fail to allow them to accept nothing less than immortality.

The Independent on Sunday

Bradford has done his homework; he quotes some fascinating exchanges.

Simultaneously playful and erudite, Richard Bradford’s cleverly conceived work embraces the bias and the bizarre impulses of writers we might suppose above such behaviour.

There’s a vacancy for a compendium of the most entertaining feuds of the past. And Bradford has stepped in to fill it.