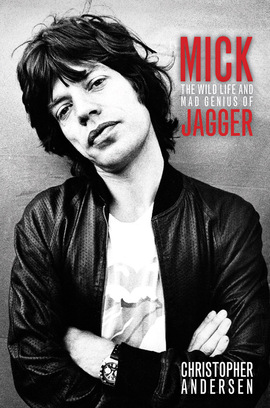 Mick The Wild Life and Mad Genius of Jagger

“He’s a smart little mother******, I’ll give him that.”
Keith Richards on Mick Jagger

Is he Jumpin’ Jack Flash? A Street Fighting Man? A Man of Wealth and Taste? All this, it turns out, and far more. Mick Jagger is a force of nature, a complete original and undeniably one of the dominant cultural figures of our time. Swaggering, strutting, sometimes elusive, always spellbinding, he grabbed us by our collective throat a half-century ago and – unlike so many of his gifted peers – never let go.

As the Rolling Stones mark their 50th anniversary, journalist and #1 New York Times bestselling author Christopher Andersen builds on his earlier acclaimed book on Jagger to reveal the truth about rock’s most complex and enigmatic icon in a no-holds-barred biography as impossible to ignore as Jagger himself.

Based on interviews with friends, family members, fellow music legends and industry insiders – as well as wives and legions of lovers – Mick sheds new light on a man whose very name defines an era. With never-before-revealed accounts of his often turbulent relationships – from his bandmates, groupies and rabid fans to such intimates as Andy Warhol, John Lennon, Jackie Onassis and Bill Clinton – this book is as explosive and riveting as its subject.

The definitive biography of a living legend.