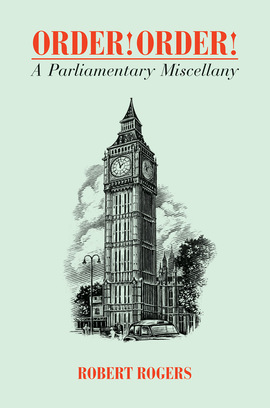 With its mixture of politics, history, conflict and oratory, as well as many traditions and peculiarities and a host of characters, the village of Parliament provides a host of fascinating facts and interesting stories.

Unavailable for some time and republished here to coincide with the sequel, Who Goes Home?, this remarkable book takes us on an unstoppable textual tour of the heart of government, explaining everything from what’s in the Dispatch Box to the original tune of the clock tower. Order! Order! includes affairs of state, history, clashes, speech-making, architecture and oddities of every kind.

What is Parliamentary language? Why is the House of Commons’ colour green while the Lords is red? Did you know that Disraeli was shouted down the first time he tried to speak? And what about the great events, such as Callaghan losing the 1979 vote of confidence, the hunting protest, and the characters such as the 17th Century Speaker who had such a squint no-one could tell who he was looking at and calling to speak? As entertaining as it is informative, and with the unique knowledge of an insider, there is something of interest for everyone, in this fascinating and informative guide.