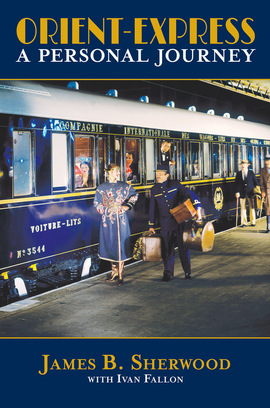 By Ivan Fallon and James B. Sherwood

When the fabled Orient-Express train, which had carried the rich and the famous (as well as some highly suspicious characters) across Europe in superb style for nearly a century, was taken out of service in 1977, James B. Sherwood bought two of its 1920s luxury sleeping cars at auction. He then spent $31 million meticulously restoring the ‘world’s most celebrated train’, which was relaunched in 1982 running along the original route of the Simplon-Orient-Express from London and Paris to Venice.

Sherwood, known as ‘the father of container leasing’, made his first fortune from the Sea Containers company that he started in 1965. The purchase of the Hotel Cipriani in 1976 and the Orient-Express carriages a year later marked his entry into an entirely new business which became Orient-Express Hotels with fifty exceptional properties in twenty-four countries. They include the Copacabana Palace in Rio de Janeiro, the Grand Hotel Europe in St. Petersburg, the Hotel Ritz in Madrid, Charleston Place in South Carolina, ‘21’ Club in Manhattan and the Mount Nelson in Cape Town.

Sherwood opened up the Far Eastern market with the launch of the cruise ship Road to Mandalay on the Irrawaddy River in Burma, and the Eastern & Oriental Express tourist train which operates between Singapore and Bangkok. He also led the way into Peru where Orient-Express Hotels now operates five of the country’s leading hotels as well as the railways serving the ‘lost city’ of Machu Picchu, Lake Titicaca and down to the sea.

Sherwood’s personal journey has been a remarkable and incident-packed one, and is told here with a dry and self-deprecating wit and an astonishing eye for detail. It took him through Yale to the Far East, where as a young lieutenant in the U.S. Navy he supported American efforts to hold back the tide of Communism which was spreading through Southeast Asia. He joined United States Lines in 1959 and was based in France where he developed one of the first container shipping operations using the passenger liners ss. United States and ss. America.

He ends this book with his own personal list of what makes a great hotel. No one in the world knows more about it.

Snakes and Ladders
In the Shadows
Unmasking Our Leaders
Independent Nation