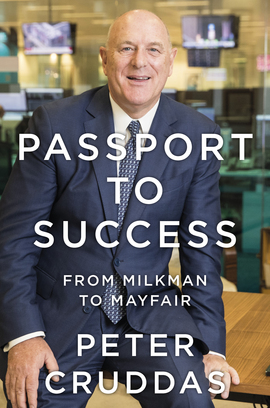 Passport to Success From Milkman to Mayfair

The son of a meat market porter and an office cleaner, Peter Cruddas left Shoreditch Comprehensive School at the age of fifteen with no qualifications and a part-time job as a milkman. Today he’s Lord Cruddas of Shoreditch, the founder of a £1.5 billion financial trading company and a distinguished philanthropist, giving to over 200 charities through his foundation, which helps young people from disadvantaged backgrounds.

Fed up with Labour’s economic mismanagement, Cruddas began his foray into politics, becoming a key Conservative Party donor. But after being elevated to treasurer in 2011, he fell victim to a Sunday Times sting in which he was falsely accused of breaking the law on party donations. With unflinching honesty, he reveals the full story of his successful libel battle and opens a Pandora’s box of profound wider questions about newspaper dark arts and the power of the British press over the judicial system.

Refusing to be scared off from the political world, Cruddas co-founded the winning Vote Leave campaign. Here, he gives a detailed insider view of the real reasons behind the victory and contemplates how Britain can now thrive outside the EU.

Filled with heartbreak and elation, this is the extraordinary story of Cruddas’s epic rise from an east London council estate to a Mayfair mansion – and includes plenty of tips for budding billionaires.

Beyond a Fringe
Inside Thatcher’s Last Election