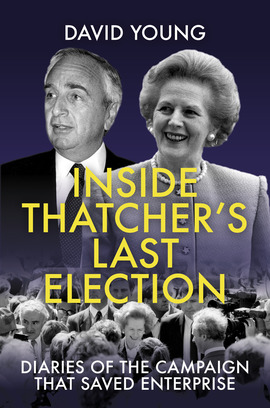 The year is 1987. Having made history by becoming the UK’s first female Prime Minister and then driving out the most left-wing manifesto the country has ever seen, Margaret Thatcher faces a climactic third election campaign.

Her eight years in power have been pivotal in guiding the UK back onto the path towards prosperity, and as he surveys the scene, David Young, Secretary of State for Employment, can see the fragile seeds of Thatcher’s government beginning to grow. But this third election threatens to destroy it all, plunging the nation back into the chaos of union militancy, the three-day week and the Winter of Discontent, when Britain ground to a halt and even the bodies lay unburied. Drafted in to run the campaign, Young knows one thing for certain: the country cannot afford to go back.

Written in lucid, powerful prose, Young’s remarkable diary of the election that set the UK on course for the next thirty years invites readers into the room with the key players, including the Prime Minister herself. Full of gut-wrenching claustrophobia, tension and paranoia, Inside Thatcher’s Last Election reveals the personality clashes that threatened to derail the campaign from the beginning and presents a very different woman from the Thatcher we think we know.

For those in the eye of the storm, there was little doubt about what was at stake: the future of Britain’s enterprise.

Listen to Lord David Young talk about his experience of running Thatcher's last election on the Biteback podcast.

“Riveting… Scholars of the period will find his record invaluable; for the casual reader, it brings home how ghastly the clash of egos among politicians can be, and what a repulsive trade politics is. Sadly, in the 34 years since Young wrote his diaries, it has become far worse.”

"The exciting tale told in this book takes the reader into the eye of the storm."

“I greatly enjoyed these diaries. It’s not just a depiction of an important moment in political history, it’s a brilliant description of what it is like working at the centre of a national election campaign. It brought it all back for me. If you haven’t been there, this is the next best thing.”

“A gripping fly-on-the-wall account of the Downing Street characters who drove enterprise to the centre of political thinking in Britain.”

“Never before will you have read such an extraordinary, in-depth, unique insight into the intricate workings of Margaret Thatcher and her government. This day-by-day, moment-to-moment account of her third election victory comes not from a politician but from a leading entrepreneur and businessman who was instrumental in enabling Thatcher to transform Britain, the sick man of Europe, into one of the most pre-eminent enterprise nations in the world. British business owes a huge amount to David Young, and this book clearly demonstrates why. This is not a ringside view; this is being in the ring experiencing it blow by blow!”

Karan Bilimoria, president of the CBI