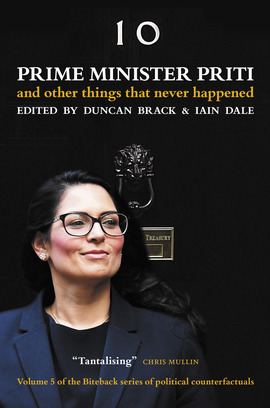 Prime Minister Priti... And other things that never happened

By Duncan Brack and Iain Dale

"She woke with a start. Could it really have happened, or was it just a cruel dream? One way to find out. She reached for the remote control … ‘You’re watching GB News, the fair and balanced way to start your day,’ intoned the voice of Andrew Neil, overlaid on a remix of ‘Land of Hope and Glory’.

What does it take to change history? Clement Attlee dying on the battlefield, perhaps? John Lennon surviving that bullet, or Theresa May finally (finally!) passing her Brexit deal? Or maybe the pivotal recent years of UK history turned on one man’s decision to have just one more drink…

This is the world of political counterfactuals. Here, twenty-three fictional accounts, written by experts in their fields, tell the tales of what might have been – and what might still come to pass. Captivating and illuminating, these stories are guaranteed to make you smile – or gasp in horror...

“Another tantalising series of what-ifs… but Priti Patel for Prime Minister? I wouldn’t rule it out.”