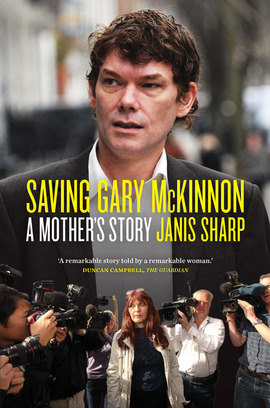 For ten years Gary McKinnon became the unwilling focus of Anglo-US diplomatic relations. A computer systems analyst living in London, he firmly believed that the US government was withholding vital information about the presence of UFOs. The unremarkable lives of he and his mother Janis changed dramatically one morning in March 2002 when Gary phoned to tell her that he had been arrested and spent four hours at his local police station being interviewed about hacking into US government computers. Paul J McNulty, the then U.S Attorney for Virginia, announced that Gary was indicted in Alexandria, Virginia on November 12th that year, and simultaneously announced that the United States intended to extradite him.
Two years later, on 7 October 2004, the US government filed a request for Gary’s extradition and on 7 June 2005 he was arrested. Extradition to the US seemed certain and so, fearing that Gary would take his own life rather than face being taken away to face seven counts of up to ten years each, Janis’s extraordinary battle began.
Janis Sharp spent the following ten years and seven months fighting her son’s extradition. In October 2012 she finally won her battle and in December 2012 the Crown Prosecution Service announced that Gary would not face charges in the UK either. These two announcements were a spectacular victory for Janis and spoke volumes about her relentless fight to save Gary’s life. Saving Gary McKinnon is the true story of a mother’s fight to save her son from living out the rest of his life behind bars. The US judiciary had all the might of the world’s greatest power. But it had not reckoned on Gary’s mother.

[It] is impossible not to be touched by her determination to take notice of the little people...

It is a fascinating read: inspiring, shocking...

Janis Sharp's book is a wonderful insight into the story behind the headlines - and it was very brave of her to be so open about the impact on her and her family. There's much humour in Janis' recollections such as requests from the Home Office to stop writing to them "as the volume of mail from Gary's supporters was stopping them getting on with their work".

There is no "reaching out" in Ms Sharp's book, no "share of voice". There is just unaffected and deeply affecting prose...