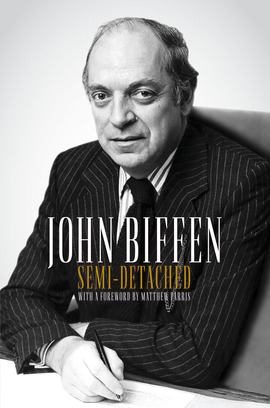 Semi-Detached The Autobiography of John Biffen

Immensely respected on both sides of the House, John Biffen was a man of charm, wisdom and intelligence. Celebrated as one of the cleverest and nicest politicians around, he brought to the Conservative benches one of the most original economic minds of his generation.
Biffen served as Chief Secretary to the Treasury and Secretary of State for Trade, but it was as Leader of the House of Commons that he really made his mark. Over time, he found himself increasingly at odds with the divisive nature and style of Margaret Thatcher’s government. Thatcher was unreceptive and he was slowly frozen out. In sacking Biffen from her Cabinet, she lost one of the more human faces of her government.
With its candid account of the subject’s battle with depression, this fascinating autobiography, with extensive extracts from his unpublished diaries, is a portrait of great humanity and determination set against the backdrop of public life.
Semi-Detached revisits dramatic and poignant moments from Biffen’s personal life and from the corridors of power, presenting a moving and penetrating portrayal of one of the twentieth century’s most remarkable politicians.

This is a very personal history from a private man, a man of idea with sensitive feeling and with no pretence... He described himself as a "Tory Fabian", and his collected reflections are more self-critical and humane than many written by his contemporaries.

Semi-Detached by John Biffen himself is where it belongs – in the public arena and certain to reach the book shelves of a wide and appreciative audience.

John Biffen was one of the most liked and admired parliamentarians … The results [of his diaries] are charming.

The book is particularly striking as it reveals that throughout his literary career he faced debilitating depression.

The book is very special, standing as a tribute both to Lady Biffen as well as to her much loved husband…

It’s rare to read a political memoir so untainted by malice or self-justification. ‘The most loyal and straightforward of men’ was the verdict of Brian Walden, who conducted the fateful television interview. Biffen’s thoughtful, conscientious, self-effacing and unerringly honest character shines through every page. The puzzle is, how on earth did a man like that ever end up in Mrs Thatcher’s cabinet?