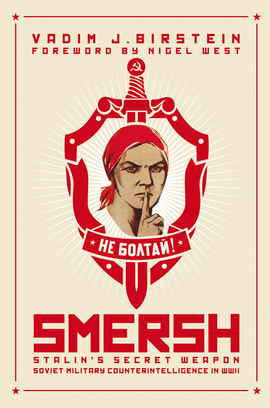 SMERSH is the award-winning account of the top-secret counterintelligence organisation that dealt with Stalin’s enemies from within the shadowy recesses of Soviet government.
As James Bond’s nemesis in Ian Fleming’s novels, SMERSH and its operatives were depicted in exotic duels with 007, rather than fostering the bleak oppression and terror they actually spread in the name of their dictator. Stalin drew a veil of secrecy over SMERSH’s operations in 1946, but that did not stop him using it to terrify Red Army dissenters in Leningrad and Moscow, or to abduct and execute suspected spooks – often without cause – across mainland Europe.

Formed to mop up Nazi spy rings at the end of the Second World War, SMERSH gained its name from a combination of the Russian words for ‘Death to Spies’. Successive Communist governments suppressed traces of Stalin’s political hit squad; now Vadim Birstein lays bare the surgical brutality with which it exerted its influence as part of the paranoid regime, both within the Soviet Union and in the wider world.

SMERSH was the most mysterious and secret of organisations – this definitive and magisterial history finally reveals truths that lay buried for nearly fifty years.