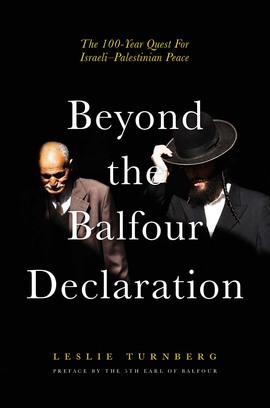 Preface by the 5th Earl Of Balfour

2017 marks one hundred years since the Balfour Declaration, the landmark letter that expressed the British government’s support for a Jewish homeland in Palestine. A century later, the conflict between Israel and the Palestinians rages on, without prospect of a peace agreement any time soon. This timely book explores why innumerable efforts to resolve the conflict have always failed, and questions how an agreement could ever be reached.

Shedding some much-needed light on many of the misconceptions of the Declaration, this book also navigates the complex history of the situation ever since. Labour peer and medical professor Leslie Turnberg elegantly places this particular conflict within the context of the turmoil in the rest of the Middle East, explaining how they have influenced one another.

At a time of global uncertainties and fears of terrorism, Turnberg offers a balanced look at how best to plot a course amongst shifting alliances and an ever-changing political climate. Why have negotiations between Palestine and Israel consistently broken down? Beyond the Balfour Declaration details what an agreement might look like, and the steps that need to be taken to begin the process.

“At last! Exactly the book on the Israeli–Palestinian situation that everyone needs: part well-researched and objective history; part intelligent analysis of current affairs; part realistic plan for a positive future for the region. Turnberg’s scholarly, sane, and even wise book – never naively over-optimistic, but also never over-cynical – is the general reader’s best guide to the past, present and future of this uniquely troubled region.”

“Truly a great achievement. Leslie Turnberg has covered an enormous sweep of history and done it with extraordinary good judgement, and with some unique personal insights.”

“To mark the centenary of the Balfour Declaration, Leslie Turnberg has written a much-needed and insightful account of the background to the Declaration itself, the factors that lay behind the creation of the modern state of Israel, and the prospects for peace between Israel and the Palestinians. A fine, sensitive and balanced work, as well as a source of much needed hope on an issue subject to far too much premature despair. An important and timely work.”

“This volume is commendable for its two important addenda to the vast literature on the history of the Israeli–Palestinian conflict. First, he brings a comprehensive review of the development of the conflict and the various stages along the historical timeline since the Balfour Declaration in 1917, until recently years. Second, the book describes very deeply the picture on ‘both sides of the hill’ and tries to explain why the leaders of the two peoples have failed in achieving peace. In both respects this book is an important contribution to the knowledge and study of the Israeli–Palestinian conflict. Although the book tries to explain why the long-awaited peace has not been achieved, it is actually a road map for the future for all those involved in promoting the process of comprehension and reconciliation in the Holy Land.”

Is Anything Happening?
Confessions of a Rabbi
The Left's Jewish Problem
Anti-Semitism