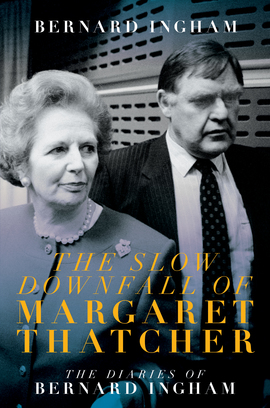 The Slow Downfall of Margaret Thatcher The Diaries of Bernard Ingham

Branded ‘the rough-spoken Yorkshire Rasputin’, Bernard Ingham served as Margaret Thatcher’s press secretary for virtually all of her eleven-year premiership, adroitly steering the government’s relationship with the media – and the Prime Minister’s relationship with the nation. Known for his unswerving loyalty, he robustly defended Thatcher from her critics in both the press and the political jungle, earning him friends and foes in equal measure, as she went on to win three consecutive elections.

Thatcher’s last days in power, however, saw some of the most remarkable events in British political history, and Ingham was, for once, helpless to turn the tide. These eagerly anticipated diaries cover two turbulent years from January 1989 to December 1990 – a period Ingham terms ‘the long, slow assassination’ – detailing the succession of crises that led to the Prime Minister’s resignation in November 1990, and the critical roles played by the big political beasts of the time.

With his trademark gruff candour and wry wit, Ingham’s spirited diaries shed new light on Thatcher’s final months in No. 10, charting the dramatic downfall of one of the most influential figures of the twentieth century.

“Entertainingly written and fulfils the first requirement of any political memoir, giving a tantalising glimpse of the hem of the black petticoat of power.”

“Bernard Ingham was the rock in Margaret Thatcher’s public life in whom she placed complete trust. He often seemed to know what was in her mind before she did. This volume of his diaries gives the ultimate insider’s account of her last years as Prime Minister, from the triumph of victory in the Cold War to the squalid plotting of her colleagues which brought down one of Britain’s greatest Prime Ministers.”

“No one knew or understood Margaret Thatcher – not even those Cabinet ministers closest to her – better than Bernard Ingham. In these boisterous diaries, taking in much of the latter part of Thatcher’s occupancy of No. 10, Sir Bernard penetrates behind the scenes in a way no formal biographer or historian has the ability to achieve, and this brings to the reader a completely new and fascinating take on those tumultuous events. Ingham was at her side every step of the way, and this book tells us much more about Thatcher’s demeanour and foibles than we ever knew. It is a glorious revelation and any serious student of modern politics should have it on his bookshelves. It is, frankly, a masterpiece.”