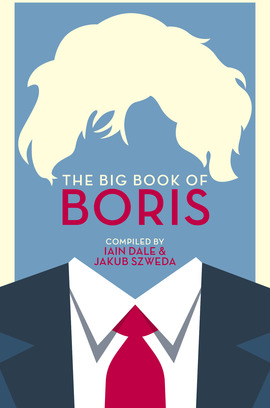 The Big Book of Boris

By Iain Dale and Jakub Szweda

Boris Johnson, the UK's new Prime Minister, has ruled out holding an early general election. But, as we’ve seen, anything can happen in today’s politics.

There are few politicians who could genuinely be described as a phenomenon. Boris Johnson is undoubtedly one. With a shake of that foppish blond mop, a glimmer of his madcap smile and the voice of a demented public school boy, Boris provides comedy gold every time he opens his erudite mouth.

The allure of this blundering rapscallion to many on the Tory benches and to the membership of the Conservative Party at large is all too obvious. He says what few others will say in public and, indeed, he will do so on the record – appearing to care little what people think of him or his views.

This book is big on fun, comedy, life and spirit. Containing a selection of the very finest Boris-isms and illustrated by specially commissioned cartoons, The Big Book of Boris is a highly amusing read, straight from the gaffe-strewn mouth of Britain’s most colourful politician.