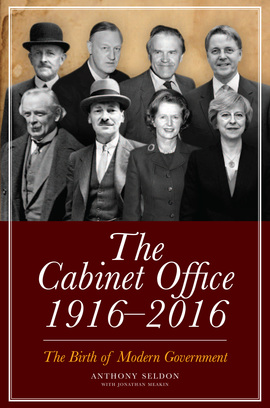 The Cabinet Office, 1916–2016 The Birth of Modern Government

By Anthony Seldon and Jonathan Meakin

Since its creation in the depths of the Great War in December 1916, the Cabinet Office has retained a uniquely central place in the ever-changing political landscape of the last century.

While the revolving door of 10 Downing Street admits and ejects its inhabitants every few years, the Cabinet Office remains a constant, supporting and guiding successive Prime Ministers and their governments, regardless of their political leanings, all the while keeping the British state safe, stable and secure.

It has been at the centre of everything – wars, intelligence briefings, spy scandals, disputed elections, political crises – and its eleven Cabinet Secretaries, ever at the right hand of their political masters, have borne witness to them all. The true ‘men of secrets’, these individuals are granted access to the meetings that determine the course of history, trusted with the most classified information the state possesses.

Written with unparalleled access to documents and personnel by acclaimed political historian, commentator and biographer Anthony Seldon, this lavishly illustrated history is the definitive inside account of what has really gone on in the last 100 years of British politics.

“A well informed and engaging book which provides new perspectives on many of the key political issues of the last century.”

“It should be required reading for every person who wants to be in government. To a wider readership this book is a great read, because it gives us the best glimpse yet of what has really gone on at the heart of our government over the last 100 years.”

“The Cabinet Office is one of the great mysteries of British politics. Few in the Westminster bubble know quite what it gets up to. If anyone can make sense of this hidden corner of British government it is Anthony Seldon, the most insightful and determined chronicler of the politics of our times.”

“Anthony Seldon is always a wonderful combination of authoritative and revelatory. This book will be essential reading for anyone who wants to understand the workings of Whitehall and the machinations of power.”

“Very enjoyable and readable. A most worthwhile addition to our history of government.”

“The Cabinet Secretary is the key to the effective working of our Cabinet system. Only eleven men have held this crucial post since 1916. They have now found their history in this fine study by Anthony Seldon, which is indispensable for all serious students of British government.”

“This is a dangerous book. It takes us into the engine room of British government and shows us how it really works. Many of its inhabitants would prefer to keep its secrets. The only people who will benefit from Anthony Seldon’s disclosure are the voting public.”

Cameron at 10
Brown at 10
Unmasking Our Leaders
Break-Up