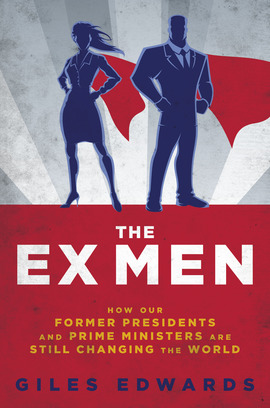 The men and women who created today’s liberal, democratic, globalised world order may now have left public office, but they have not retired. So, what are they doing, and how does it affect the rest of us?

Giles Edwards has interviewed more than twenty former leaders, from Presidents overthrown in coups to winners of Nobel Prizes. He has spent time at their clubs and resorts, spoken to the people who work with them, and probed the organisations and individuals who hire them.

From running international organisations to monitoring elections, consulting, lobbying and giving hundred-thousand-dollar speeches, The Ex Men face a dazzling array of opportunities after leaving office, many of them free from any political accountability. But how much do they really achieve with all that soft power? And does all this frantic activity amount to anything more than money-making or legacy-burnishing?

In this illuminating investigation, Edwards takes us inside the hidden world of The Ex Men to uncover the many ways in which they wield power, for good and for ill.

“The personal is political – as Giles’s meticulous and engaging writing shows. What does happen to these men and women after the biggest jobs of their lives? How does huge power change people, both for good and for bad? The Ex Men is a much-needed look at the afterlives of these power players, exploring what they still fight for behind the scenes – and how that affects our lives – without us realising it.”

“In Giles Edwards the ancients of the world’s political tribes have found their number one anthropologist. With insight and humanity, he analyses both their characters and their efforts to move the global influence markets in this fascinating study.”