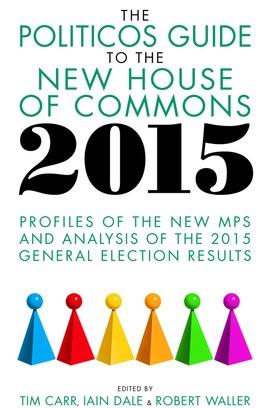 In the wake of the most unprecedented election result in recent memory, the question on everyone’s lips is: what just happened to the UK’s political landscape – and why? And who are the 182 new faces on the House of Commons benches?

In The Politicos Guide to the New House of Commons 2015, public affairs consultant Tim Carr teams up with editors of the bestselling Politicos Guide to the 2015 General Election Iain Dale and Robert Waller to present an all-inclusive and essential post-election document for academics, journalists, students and political enthusiasts alike in the wake of the poll-defying 2015 general election.

Wide-ranging and accessible, this essential guide provides, amongst much else:
• Biographies of the class of 2015, alongside details of their majorities and constituencies;
• Demographic analysis by age, gender, ethnic origin, education and background;
• Lists of new marginal constituencies, possible targets seats, defeated MPs, and more;
• Expert commentary from political journalists and pollsters, exploring the role of the media, the historic result in Scotland and the future impact of fixed-term parliaments.

Ranging from the disastrous pre-election polls to the failure of UKIP to make a breakthrough – and the massacre of Scottish Labour – The Politicos Guide to the New House of Commons 2015 is a must-read for anyone eager to know the details of the election result that has so dramatically re-shaped the country’s political landscape.

The Politicos Guide to the 2015 General Election
Sex, Lies & the Ballot Box
101 Ways to Win an Election
Takeover