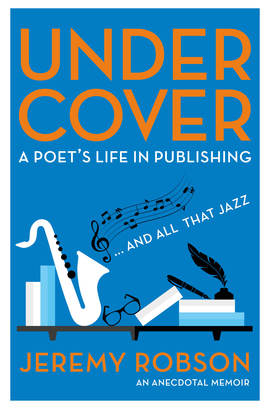 Under Cover A Poet's Life in Publishing

As an independent publisher, Jeremy Robson always punched above his weight with a roster of authors that have been the envy of many large publishers. As a poet, he has been at the centre of the poetry scene since the 1960s, with a number of highly praised volumes to his credit and the friendship of many leading poets and musicians.

In this engrossing memoir, Robson looks back at both his publishing career and life as a poet.  Stories abound; whether it be driving Muhammad Ali around Britain, coping with Michael Winner or working in the desert with David Ben-Gurion. Time spent joyously laughing with Maureen Lipman and Alan Coren while undertaking an exciting poetry reading tour with Ted Hughes, and packing the Royal Festival Hall for a historic poetry and jazz concert.  Jeremy recounts treasured and life-long friendships with  the poets and writers; Dannie Abse, Alan Sillitoe, Vernon Scannell, Laurie Lee, Yevgeny Yevtushenko, Elie Wiesel and Frederic Raphael.

Well known and celebrated as both publisher and poet, Jeremy Robson has produced a delicious memoir that will delight the reader.

The jollity, diversity and colour of these pages does not – if you read between the lines – crowd out another story: the struggle to survive and thrive as a small independent publisher in an age of amalgamations and growing corporate size. Jeremy gave me opportunities when I was less known as a writer, and I will never forget his encouragement and patronage.

I never worked with a British publisher whose sensibility excelled the excellence of Jeremy Robson’s. His responsiveness to – and, indeed his own creativity as a poet with – the written word proved to be unmatched in its depth and range.

Always the maverick, Jeremy Robson has transmogrified from trail-blazing poet to front-line publisher and back to inspired poet in one lifetime, and has remembered every thought, personality, anecdote, and period detail along the road. This is such a blast of a book!