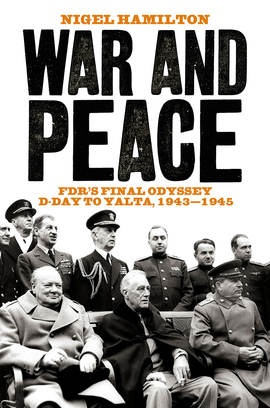 In the much-anticipated conclusion to his masterful trilogy chronicling the wartime career of Franklin Delano Roosevelt, renowned military and political biographer Nigel Hamilton aligns triumph with tragedy to show how FDR was the architect of a victorious peace that he would not live to witness. Providing the definitive account of the events in Normandy on 6 June 1944, Hamilton also reveals the fraught nature of the relationship between the greatest wartime leaders of the Allied forces.

Using hitherto unpublished documents and interviews to counter the famous narrative of World War II strategy given by Winston Churchill in his memoirs, Hamilton highlights the true significance of FDR’s leadership. Seventy-five years after the D-Day landings, we finally see, close up and in dramatic detail, who was responsible for rescuing – and insisting upon – the great American-led invasion of France in June 1944, and exactly why that invasion was orchestrated by Eisenhower.

War and Peace is the rousing final installment in one of the most important historical biographies of the twenty-first century, which demonstrates how FDR’s failing health only spurred him on in his efforts to build a US-backed post-war world order. In this stirring account of the life of one of the most celebrated political leaders of our time, Hamilton hails the President as the sole person capable of anticipating the requirements of peace in order to bring an end to the war.

"Thorough and deliberate...vividly recreates FDR's decline and makes his accomplishments all the more impressive. Like its predecessors in the trilogy, this volume will reward readers of WWII and presidential history."

"With deft storytelling and impeccable scholarship Nigel Hamilton completes his essential trilogy of FDR and World War II with a bang. War and Peace is a masterful re-evaluation of D-Day, Hitler's demise, and the Yalta Conference. A stunning achievement!"

"On the occasion of the 75th anniversary of D-Day, War and Peace is the dramatic culmination of Nigel Hamilton's magnificent trilogy of FDR's wartime leadership as commander in chief. It is also a vivid example of the critical importance of presidential leadership in times of national crisis. This sweeping narrative of Roosevelt's triumphs and the tragedy of his untimely death in 1945 is history and biography at its very finest."

Carlo D'Este, author of Patton: A Genius for War and Warlord: A Life of Winston Churchill at War, 1874-1945