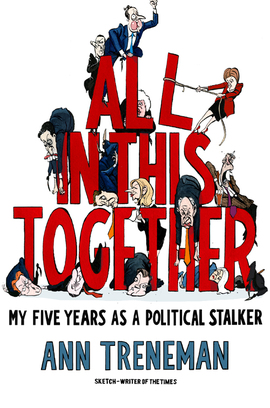 All in This Together My Five Years as a Political Stalker

In this uproarious collection, Ann Treneman, the caustic and witty parliamentary sketch-writer for The Times, tells the true, unvarnished story of Britain’s first coalition government since the Second World War.

As well as the headline acts – David Cameron and his Flashman alter ego, Nick Clegg’s struggle to stop looking sad, Ed ‘Two Kitchens’ Miliband’s heroic attempts to relaunch himself – she was there to see UKIP shed its fruitcakes, the Speaker be compared to a dwarf, and the Greens go surge-tastic.

With an eye for the absurd, an ear always attuned to the jargon junkies of politics, and a nose for what’s really going on underneath the talk, Ann Treneman chronicles the events that everyone in Parliament would much rather forget: the AV referendum; the chaos of the tuition-fee vote; the Omnishambles Budget; the train wreck that was Lords reform; the dramatic Syria vote; and, of course, the panic-stricken campaign over the Scottish Neverendum. Floods, horsemeat, badgers and bile, it’s all here – a tragicomic coalition tale.

‘Gorgeous George’ Osborne may have said ‘we’re all in this together’, but now they really are – in this hilarious book.

'Ann Treneman is brilliant. How does she do it? In a word, it's her deadpan.'

“Being a parliamentary sketchwriter is unbelievably hard. You have to be knowledgeable, topical, witty and informative – all in 600 words. In that respect, Ann Treneman of The Times was the doyenne of the trade, as seen in this account. Put aside serious history for a moment. If you want to know what the coalition government was really like, read this.”

“This book is a great read for three reasons. First, Ann Treneman writes well. Second, it’s not about her, and her starting point isn’t that politicians are all bad. And third, and most importantly, with the benefit of hindsight, so many of her judgments turned out to have been right.”