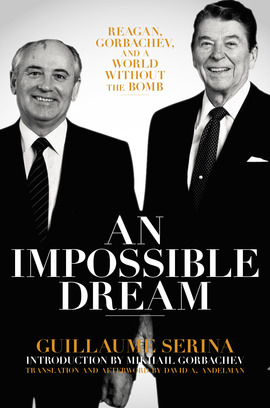 An Impossible Dream Reagan, Gorbachev, and a World Without the Bomb

Picture the scene: the Republican President of the United States credited with christening the Soviet Union an ‘Evil Empire’, and that country’s own President, the General Secretary of the Communist Party, sitting down together.

It was Reykjavík, 1986, and the meeting between Ronald Reagan and Mikhail Gorbachev really did happen—even after the agonising escalating tensions of the arms race—as the world waited with bated breath to see if a compromise would be achieved by the two leaders to secure the future of the planet.

Now, thanks to access to previously unavailable archives, historian Guillaume Serina chronicles the build-up and aftermath of that momentous summit, and employs contemporary diaries and memoranda to tell the remarkable story of how the agreement to abolish all nuclear weapons was reached.

With an introduction by Gorbachev himself, An Impossible Dream turns to the Trump administration’s own foreign and defence policy, in a daring examination of the past, present and future dangers of our coexistence with nuclear weapons.