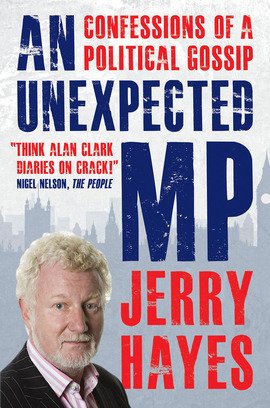 An Unexpected MP Confessions of a Political Gossip

‘Some people enter politics because they want to make the world a better place. Then there are those with well-deserved inferiority complexes who want status, power and position. Few believe me, but I entered the House of Commons purely by accident.’

High virtue in high office? Not a chance, says Jerry Hayes. No staid autobiography or dry political memoir, An Unexpected MP takes you on a raucous and salacious romp through Westminster, the media and public life.
In this no-holds-barred exposé, Jerry Hayes shows exactly why people were so surprised when he became an MP – from the duty policeman who told him to bugger off when he rolled up on his first day, to the Iron Lady herself, who looked with a steely eye on his cheerful chutzpah.

And, as the perfect antidote to the holier-than-thou, whiter-than-white ways of the current crop of politicos, the shameless – and shamelessly entertaining – Hayes makes a brilliant tour guide to the strange country that is Parliament, taking gleeful swipes at left and right alike.

Full of tall tales of unspeakable debauchery on a tsunami of alcohol, An Unexpected MP is a thundering account of the offbeat lunacy of Westminster and Fleet Street.

All politicians have feet of clay. Most are wankers.

The cracking memoirs of Jerry Hayes.

Not unlike the Alan Clark Diaries, but without the modesty or discretion. A very entertaining read.

[T]his highly entertaining memoir of 14 years as a backbencher... An impressive collection of gossipy ancedotes about his former colleagues...

His book contains a whole cornucopia of fascinating and usually hilarious anecdotes from his days at Westminster.

The most foul-mouthed political memoir of all time… a hilarious mish-mash of gossip and character assassination… funnier than Alan Clark’s Diaries.

[The] story is pure Hayes, in classic matey-talk… That’s the penance we pay for electing politician’s with a sense of humour.

Hayes gives an amusing, and at times cringe-worthy, account of his time in public life.

Don't read this book if you want to become a Member of Parliament. Be sure to read it if you don't.