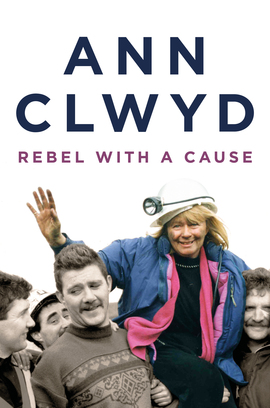 Rebel With A Cause

A BORN REBEL, ANN CLWYD HAS NEVER FEARED A FIGHT.

The first woman to represent a Welsh Valleys constituency in Parliament, Ann Clwyd has spent thirty-three years in the corridors of power and witnessed the key political events of modern times, from the miners’ strike, which ripped apart communities, to the EU referendum, which looks set to reshape a continent. She was shadow Secretary of State for Wales and shadow Secretary of State for International Development – only to be sacked over her refusals to toe the Labour Party line.

Waging a tireless war against injustice from the back benches, Ann has campaigned for better-quality NHS care, a cause close to her heart and one that became tragically personal when her beloved husband, Owen, was failed by our hospitals. Publicly denounced by Saddam Hussein, she has been a fierce ally of the Iraqi people for decades, earning a place on the regime’s ‘most wanted’ list and winning the lifelong affection of its citizens.

Rebel with a Cause is Ann Clwyd’s remarkable story of battling for her principles, regardless of wounds inflicted on her political career. This resolve was demonstrated when, undeterred by Labour leader Jeremy Corbyn’s three-line whip, she voted against Article 50. Despite having faced constant opposition over the course of her parliamentary career, Ann has always fought back fiercely and continues to do so to this day.

“Ann is a long-standing and committed humanitarian, and one of the most compassionate and respected public servants ever to grace the House of Commons. Her tireless support of equal rights, both at home and abroad, is revealed in this lucid account of an outstanding parliamentarian and of a campaigner resolute in her values.”

“This dogged campaigner for the world’s oppressed has real courage and stamina.”

“Kurds never forget those who helped them in times of hardship and Ann Clwyd is top of that list. When we were under attack from Saddam Hussein, she brought our plight to the world’s attention. She was even with us at Sulaimanyah when it was bombarded. She shared our pain and we keep her in our heart.”