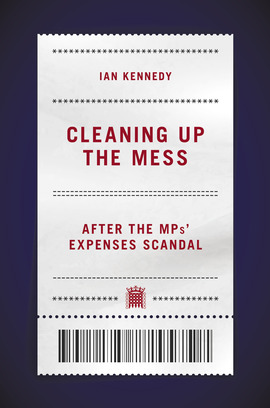 Cleaning Up the Mess After the MPs’ Expenses Scandal

In 2009, news broke that MPs had been claiming taxpayers’ money to pay for such excesses as a floating duck-house, moat-cleaning services and 550 sacks of manure. The revelations shook Westminster and compromised the voters’ trust. Urgent action had to be taken.

Cue the establishment of the Independent Parliamentary Standards Authority (IPSA), a regulator designed to scrutinise every claim and hold MPs to account. Created from scratch and operating in a world of rattled politicians accustomed to old habits, IPSA came up against a series of obstacles, ranging from MPs who had never used a computer to vicious online abuse. Ian Kennedy was the chairman of IPSA for its first seven years, and was responsible for developing it into an effective and transparent organisation.

Ten years on, he discusses his struggle to ensure the public’s money was put to good use, all the while being hounded by the press for not doing what they wanted, and by MPs themselves for doing what they’d voted for but didn’t really intend. Cleaning Up the Mess describes the bullying, bitterness and occasional kindness Kennedy encountered, and how a thick skin and conviction in IPSA’s purpose helped to restore trust in politics and politicians.

Ian Kennedy somehow volunteered for one of the most difficult jobs in British politics – sorting out a new, independent system for MPs’ expenses after the terrible scandal in 2009 which rocked confidence in Parliament to its foundations. He did a terrific job, and survived, despite the brickbats thrown at him by some MPs and the media. His account is a must-read for anyone wanting to understand how MPs got into this quagmire – and how Ian Kennedy got them out.

A courageous and important work. This deeply shocking book must be taken very seriously indeed by anyone who cares about the integrity of the British Parliament.

After the extraordinary farrago of MPs’ expenses Ian Kennedy was given the job of clearing up the mess, and despite the criticism raining down from all sides, he managed to change the system. It is a fascinating story of public service at a time when politics itself was in the dock.

The MPs’ expenses scandal did more to erode trust in British politics than any other post-war event, and fuelled the anger that led to the Brexit vote. This is the spiky memoir of the public servant charged with cleansing, or at least regulating, the Augean Stables. It is an eye-opening account of how, as an outsider, he painstakingly reformed Westminster’s culture, often only to meet near-tribal hostility from vengeful MPs and a suspicious media.