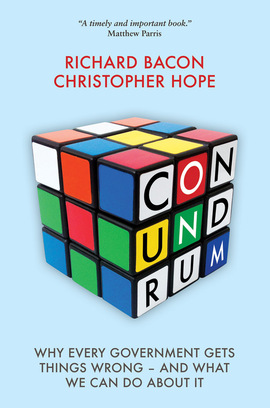 Governments do not provide value for money. In fact, they spend taxpayers’ money wastefully and even stupidly. The UK government spends an unfathomable £660 billion every year – that’s £11,000 per every person in the country, plus a further £13,000 each of accumulated debt. Although public spending is being curtailed, total government spending is still rising – it is only the rate of growth that is being slowed by cuts.
In Conundrum, Daily Telegraph Senior Political Correspondent Christopher Hope and Richard Bacon MP, who sits on the Public Accounts Committee that examines the accounts of government departments, look at a wide variety of cases where hundreds of millions and even billions of pounds of taxpayers’ money were spent on projects and programmes that went wrong, and where individual members of the public suffered as a result.
Throughout the book the authors look at examples of failure which illustrate the problems facing governments trying to make things happen. They look at why massive and expensive public computer systems tend to fail universally; how ministers are expected to set the direction for government but are barely around long enough to warm their seats; why the civil servants who are supposed to deliver public policy are hamstrung by risk-averse behaviour; and finally, Conundrum examines what can be done to improve things, and asks why none of the many attempts to reform the system over the last fifty years have worked.

Bacon and Hope have performed a valuable public service... [They] are adept at getting to the heart of issues that are integral...

The book offers unique insight into the complex relationship between minsters and departments […] it has undertaken a valuable exercise in highlighting problems with past projects.

A timely and important book...