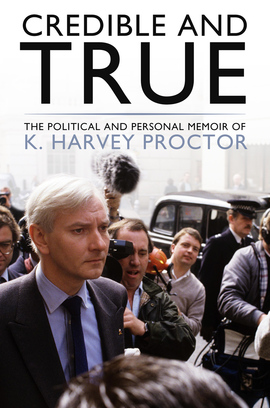 Credible and True The Political and Personal Memoir of K. Harvey Proctor

Early in the morning of 4 March 2015, a fierce knock at the door heralded the start of a new chapter in Harvey Proctor’s almost continuous relationship with the police and media, when officers from the Metropolitan Police raided his home in connection with Operation Midland, Scotland Yard’s investigation into allegations of a historic Westminster paedophile ring.

In Credible and True – words famously used by the police to describe the allegations of Proctor’s traducer – the former Conservative MP talks frankly about his life in and out of Parliament, from the struggles and controversy surrounding his resignation in 1987 to the numerous homophobic attacks endured since – one of which, revealed here in horrific detail for the first time, was a very nearly successful attempt on his life.

Finally, he speaks candidly about his most recent embroilment in Operation Midland, of being the victim of a ‘homosexual witch-hunt’ that has all but destroyed his reputation, adding to the topical debate about police lack of due process in the post-Savile world of ‘guilty until proven innocent’.

“This is the first book to be written – the first full, personal account – by someone on the receiving end of a horrific and shameful police scandal. The argument is incredibly strong; the facts are astonishing; the story is compelling.”

“I have read no more painful account of the value of the presumption of innocence, or of the cruelty that comes without it.”

“Credible and True will be an important reference book when historians research the era in which the fundamental tenet of the British justice system – ‘innocent until proven guilty’ – was inverted by the police. It takes great courage to stand up to the misdirected weight of the state. Harvey Proctor had that courage.”

Love, Paul Gambaccini
Beyond a Fringe
Impossible Victory
No Excuses