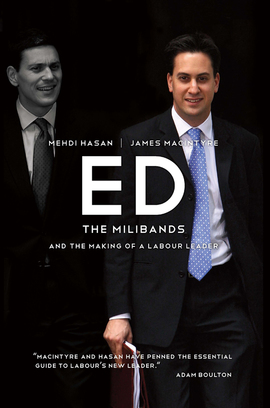 ED The Milibands and the Making of a Labour Leader

By Mehdi Hasan and James Macintyre

What makes a man put politics and ambition before family? Ed Miliband is perhaps the least understood political leader of modern times. Brought up against a backdrop of tragedy, with a prominent Marxist thinker for a father, Ed followed his brother to the same college at Oxford, into Parliament and into the Cabinet before, at the eleventh hour, snatching away David’s dream of the leadership.

This new and fully updated edition follows Ed through the highs of leading the charge against Rupert Murdoch and News International to the lows of plummeting poll ratings, poor press and that infamous ‘Blackbusters’ tweet. Yet in the wake of Osborne’s ‘omnishambles’ Budget and Labour’s impressive gains in May 2012’s local elections, political commentators have started to ask, with increasing volume, if we could indeed see Prime Minister Ed Miliband.

As the 2015 general election approaches, Mehdi Hasan and James Macintyre ask the important questions. Is Ed up to the job? Can he be trusted on the economy? And will he manage to bury the hatchet with David and bring his brother back to the Labour frontbench?

shrewd, scrupulously researched and provides revelations on every page

Exhaustively researched and written with unflagging energy ... may prove to be the definitive account of the formative years and rise to power.