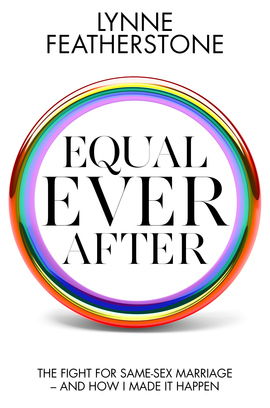 “My story starts at the very end of the journey to equal marriage rights. I stand on the shoulders of giants...”

In the future, people will find it difficult to believe that until 2014, somewhere between 5 and 10 per cent of Britain’s population were excluded from marriage.

As Equalities Minister during the coalition government, Lynne Featherstone played a fundamental role in rectifying this. From setting the wheels in motion within government, to her experiences of the abuse with which the gay community is regularly confronted, through her rebuttals against the noise and fury of her opponents, and finally to the making of history, Lynne details the surprising twists and turns of the fight. Filled with astonishing revelations about finding allies in unexpected places and encountering resistance from unforeseen foes, Equal Ever After is an honest account of one woman’s pivotal efforts during the turbulent final mile.

This is real, lived history – recent history. Many of us celebrated on the day the dream became reality; many of us know people whose lives were changed by the events described here. In this inside story, Lynne reveals the emotional lows and the exhilarating highs involved in turning hard-won social acceptance into tangible legal equality.

“The inside story of the legislation of same-sex marriage by the government minister who pioneered it, with jaw-dropping revelations of how Stonewall initially tried to scupper marriage equality.”

“Lynne delivers both an insider’s perspective and a comprehensive narrative on one of the most significant and progressive social changes in a generation.”

“We named Lynne Politician of the Year in 2012, and this book is a reminder of just how deserved that award was.”

“A pacy read and contains some fascinating behind-the-scenes stories from Westminster.”

“A very useful guide for anyone wishing to bring about change in society through public action.”