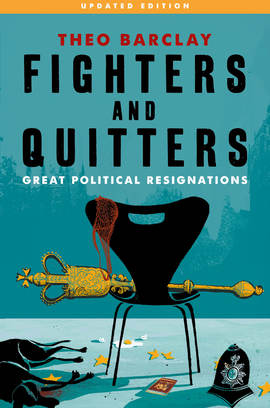 They say the first rule of politics is never to resign. It seems, however, that Britain’s leaders have all too often failed – or refused – to heed this sage advice.

Fighters and Quitters charts the scandals, controversies and cock-ups that have obliterated dreams of high office, from the ex-minister who faked his death in the 1970s, to Geoffrey Howe’s plot to topple Margaret Thatcher, to the many casualties of the Brexit saga. Then there are the sex and spy scandals that heralded doom and, of course, the infamous Profumo Affair.

Who jumped and who was pushed? Who battled to keep their job and who collapsed at the first hint of pressure? Who returned, Lazarus-like, for a second act? From humiliating surrenders to principled departures, Fighters and Quitters lifts the lid on the lives of the politicians who fell on their own swords.

Some were brought down by high-minded principle, others by basic lust. Theo Barclay details the ambition, the cover-ups and the chicanery behind many of the great resignations of modern politics – stories which seemed extraordinary at the time, and look even more bizarre in retrospect. Theo Barclay writes with fun and flair, and has a great future as a political historian.

A superb highlights reel of unscheduled departures from West­minster.

The dreary old saw about how political careers end deadens a truth which this book so engagingly brings to life – it falls to some in public life to fail spectacularly. The victims of their own greed, duplicity, arrogance and stupidity, these notables are sped to their doom by double-crossing call girls, scheming colleagues, persistent hacks and, surprisingly often, by just sheer bad luck. Theo Barclay charts their downfall with great wit, learning and humanity. Aspirants should read it as a warning; participants as a manual. The rest of us can simply enjoy the shiver of schadenfreude.

An incisive and entertaining canter through political misdeeds.