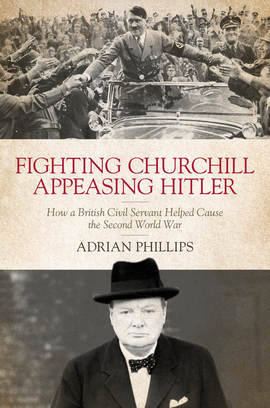 In Fighting Churchill, Appeasing Hitler Adrian Phillips presents a radical new view of the British policy of appeasement in the late 1930s. No one doubts that appeasement failed, but Phillips shows that it caused active harm – even sabotaging Britain’s preparations for war. He goes far further than previous historians in identifying the individuals responsible for a catalogue of miscalculations, deviousness and moral surrender that made the Second World War inevitable, and highlights the alternative policies that might have prevented it.

Phillips outlines how Prime Minister Neville Chamberlain and his chief advisor, Sir Horace Wilson, formed a fatally inept two-man foreign-policy machine that was immune to any objective examination, criticism or assessment – ruthlessly manipulating the media to support appeasement while batting aside policies advocated by Winston Churchill, the most vocal opponent of appeasement.

Churchill understood that Hitler was the implacable enemy of peace – and Britain – but Chamberlain and Wilson were terrified that any display of firmness would provoke him. For the first time, Phillips brings to light how Wilson and Churchill had been enemies since an incident early in their careers, and how, eventually, opposing Churchill became an end in itself.

Featuring new revelations about the personalities involved and the shameful manipulations and betrayals that went into appeasement, including an attempt to buy Hitler off with a ruthless colonialist deal in Africa, Fighting Churchill, Appeasing Hitler shines a compelling and original light on one of the darkest hours in British diplomatic history.

"This fascinating study is a model of historical sleuthing. Vigorously researched, it should appeal widely to history buffs."

"Phillips deepens the common understanding of such well-known events as Chamberlain’s September 1938 Munich visit by focusing on the role played by Sir Horace Wilson, a senior civil servant with no foreign policy background who served as the prime minister’s aide and confidante."