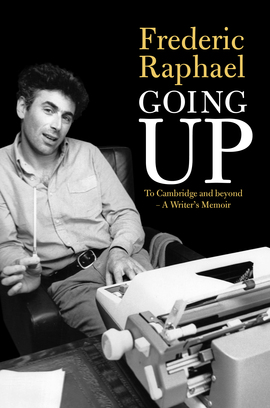 Going Up To Cambridge and beyond - A Writer's Memoir

"The manager’s name was Love.  His first-floor flat was diagonally across the private road and the rose beds from ours. Each weekday morning, at eight fifteen, he hooked open his lattice-paned bedroom window and did exercises, in a white sleeveless vest and white drawers."

So begins the extraordinary life story of one of Britain’s most celebrated writers, Frederic Raphael. Going Up is a journey from Chicago to Putney, to Charterhouse, on up to Cambridge, and beyond to Hollywood and France, recording experiences that were absorbed in his opulent novels and screenplays. Raphael is the author of over twenty novels, the most celebrated being The Glittering Prizes and its sequels, following the aspirations and changing lives of a group of Cambridge students through to middle age.

The Glittering Prizes became a critically acclaimed six-part BBC television series for which Raphael would win a Royal Television Society Writer of the Year Award. He also won an Oscar for his screenplay for the 1965 movie Darling.

Going Up is a dazzling piece of virtuoso prose writing that is fabulously indiscreet but also deeply moving, and punctuated throughout by Raphael’s indefatigable wit and incomparable erudition.

'No thresher has been more enthusiastic in reducing the cornfield of others’ reputations to size ... A hugely entertaining book'.

‘Even the most slow-moving passages are redeemed by the elegance of Raphael’s prose and his lethal eye for both the looks and the character of those he encounters… Going Up ends in the early Sixties… I long to learn what happened next.’

'There are things to delight and savour on almost every page of this rich memoir… For anyone of a certain age, this book offers the deep purring pleasure of nostalgia; for younger readers a picture of a lost world, distant from today’s corporate publishing. I loved it, and look forward to a sequel, and Raphael’s sweet-and-sour memories of the Sixties and his Oscar-winning days.'

'[Raphael’s] firework eloquence is dazzling… All [his] writings show a quick sensitivity to dialogue and hidden meanings. The people in his memoirs, like the characters in his novels, bound off the page into life – boisterous, punchy and gloriously funny.'