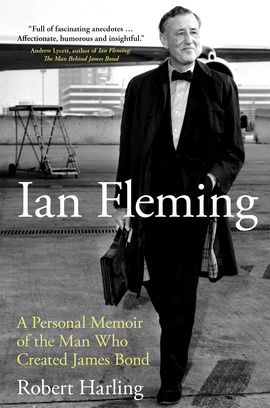 Forged during the Second World War, the close and abiding friendship of Robert Harling and Ian Fleming, one of the twentieth century’s most iconic authors, would go on to define the lives and literature of both men significantly.

Their paths first crossed in 1939, and Harling later became Fleming’s deputy in the commando unit dubbed ‘Fleming’s Secret Navy’, which was tasked with obtaining equipment, codebooks and intelligence from the enemy. The war made fast friends of the two writers, and Fleming would go on to immortalise Harling in his hugely popular Bond novels Thunderball and The Spy Who Loved Me.

Yet beneath the pair’s charm, charisma and creativity was an altogether darker reality. Documenting in vivid detail his private exchanges with Fleming, Harling exposes the personality behind his protagonist – one tempered by debilitating bouts of depression and a deep-rooted distrust of women.

This extraordinary memoir provides a fascinating and unprecedented insight into the mind of the creator of James Bond – from one of those who knew him best.

'Robert Harling was a man of many talents, who worked with Ian Fleming in naval intelligence and journalism, as well as being a thriller writer himself. He has produced a memoir of his close friend that is full of fascinating anecdotes, and that, without glossing over the imperfections of its subject, manages to be affectionate, humorous and insightful. The result is a wonderful treat – a welcome addition to the literature about 007’s creator.'

'Anyone seriously interested in the melancholic Old Etonian Scot who created James Bond will fall on this long-lost memoir with genuine joy. Robert Harling’s authentic book is funny and frank and revealing about Ian Fleming and his social milieu, with real sadness under all the banter.'

'This book not only explains the extraordinary success of Ian Fleming; it is an eyewitness account of the growth of design and fashion after the Second World War by the man whose genius created both.'

"Harling brings a unique and authoritative perspective to a compelling subject, immeasurably enhancing our understanding of both Ian Fleming and the character and world of James Bond."

‘[An] enjoyable book, filled with insight’

Harling’s affection for him is clear, his loyalty never wavering. An absolute delight of a read.

'Searingly, almost painfully honest, this picture of the sex-and-danger-saturated relationship between Harling and Fleming is as gripping and as challenging as the best of the Bond novels.'