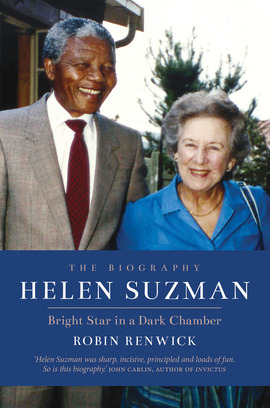 ‘The task of all who believe in multiracialism in this country is to survive. Quite inevitably time is on our side…’

Helen Suzman was the voice of South Africa’s conscience during the darkest days of apartheid. She stood alone in parliament, confronted by a legion of highly chauvinist male politicians. Armed with the relentless determination and biting wit for which she became renowned, Suzman battled the racist regime and earned her reputation as a legendary anti-apartheid campaigner. Despite constant antagonism and the threat of violence, she forced into the global spotlight the injustices of the country’s minority rule.

Access to Suzman’s papers, including her unpublished correspondence with Nelson Mandela, was granted by her family to the author, former British ambassador to South Africa Robin Renwick, who has penned a book rich with examples of her humour and political brilliance. This first full biography goes beyond her famous struggle against apartheid into her criticisms of the post-apartheid government. It is a fascinating insight into the life of a truly great South African and her role in one of the most important struggles in modern history.

An extract from Helen Suzman by Robin Renwick

Wonderfully readable story of someone I think of every day.

Lord Renwick has done us all a great service.

This well told story of Lord Renwick’s old friend, revered by a whole generation of Robben Islanders, is also the history of the rise and fall of apartheid... brilliant use of vignettes and anecdotes.

A fascinating insight into the life of a truly great South African... Former British Ambassador to South Africa Robin Renwick has penned a book rich with examples of her humour and political brilliance.

A story of sheer political grit, courage and conviction, proving that even in the darkest hour there remain people loyal to their principles.

An admirable and affectionate portrait of a remarkable woman.

David Welsh, author of The Rise and Fall of Apartheid

A remarkable biography about a memorable woman. As British ambassador to South Africa, Lord Robin Renwick established a lasting friendship with Helen Suzman. Hence the excellence of this biography: the clarity of language, grasp and depth of issues, the human touch that pervades every chapter, and the deceptively easy readability. Coming at a time when liberalism has again come to the forefront of the national debate, it could not have appeared at a better moment.

Helen Suzman was sharp, incisive, principled and loads of fun. So is this biography... Brings Helen Suzman to life.

Robin Renwick was British Ambassador in the 1980s, and writes lucidly and carefully as both friend and historian, taking us through the years of tightening apartheid and its educational, social and domestic repressions. It covers Sharpeville, Soweto, Robben Island and the atrocities and injustices which Suzman fought... as a character she emerges superbly.

[T]he truest of liberals... this crisp, lucid account is persuasive in presenting her as the doughtiest of fighters for human rights anywhere and one of the finest parliamentarians.

Robin Renwick’s biography brims with anecdotes. In an era of overlong biographies, it shares her fondness for clarity, concision and humour. It is also exquisitely timed... and relevant today.

The new insights that Robin Renwick brings to the extraordinary life and achievements of the late Helen Suzman will help to ensure that this exceptional South African and universally acknowledged human rights campaigner is accorded her rightful place in history.

Ad & Wal
Outside In
The End of Apartheid
Ready For Hillary?